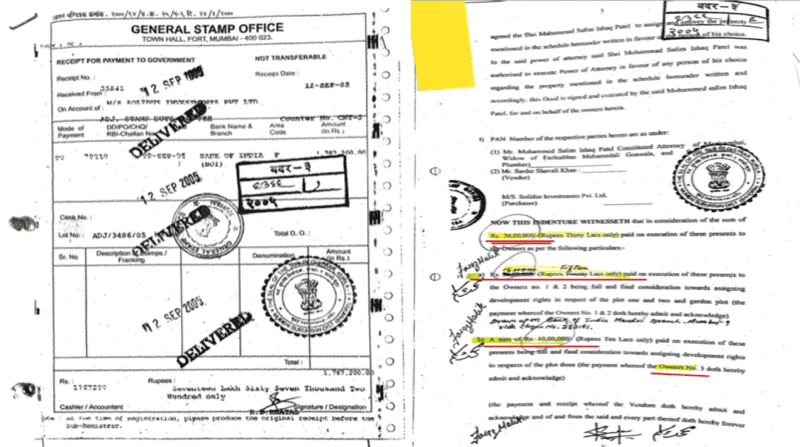 Maharashtra cabinet minister Nawab Malik seems to be in trouble. Leader of opposition Devendra Fadnavis today accused him and his family of buying a plot from Mohammad Salim Ishaq Patel and Badshah Khan.

Mohammad Salim is a “front man” of Dawood Ibrahim’s sister Haseena Parker. And Badshah Khan is a 1993 blast convict. The former Maharashtra Chief Minister disclosed this in a press conference today. The alleged plot of 2.80 acres was bought by Malik in 2005.

Fadnavis told reporters that he had documents of five such property deals. He said that he will give these documents to the appropriate authorities.

Devendra Fadnawis said that he will also be sharing these documents with Nationalist Congress Party (NCP) supremo Sharad Pawar. The former CM said that he intends to bring to Pawar’s knowledge the kind of activities his party functionaries are involved in.

The BJP leader further alleged Malik did business with people involved in blasts that shook Mumbai and the nation. “He purchased land from convicts of the case at rates cheaper than market prices. Was this a deal to save prime land from being forfeited under TADA law?” He questioned.

Fadnavis claimed during press conference that a prime plot on LBS Road in Kurla was purchased for mere Rs 20 lakh when the market rate was whopping Rs 2,053 per square feet in 2005 in the vicinity. The deal was done when Malik was a minister in the previous Congress-NCP government,” he alleged.

“This is not Salim-Javed story but a very serious matter of National importance,” he posted on Twitter.

“I wish to introduce and tell about 2 people and their backgrounds, Sardar Shaha Wali Khan and Mohd. Salim Ishaq Patel. This story is about Sardar Shah Wali Khan who is convicted in 2007 by Tada Court for Life Imprisonment in 1993 Mumbai Bomb Blast. Supreme Court has confirmed the said sentence in 2013. Another person is Mohammad Salim Ishaq Patel alias Salim Patel as he’s known – front man of Haseena Parker. He was arrested in 2007 with Haseena Parkar in land grabbing and other fraud issues. He has been her frontman in property grabbing matters. Solidus investment is Nawab Malik’s company and land was purchased from these underworld criminals,” he shared on Twitter.

“3 acre land at LBS road got purchased only for ₹20 lakh. Original value is ₹3 crore !!! Why did you purchase land from criminals of Mumbai? WHY DID YOU DO BUSINESS WITH THE KILLERS OF MUMBAI?,” the ex-CM questioned further.

The allegations are coming at a time when there are a series of controversies following the arrest of Aryan Khan. He is son of Movie entertainer Shah Rukh Khan. Aryan was arrested in a drugs bust case aboard a Goa-bound cruise last month.

Malik has made serious allegations against the Narcotics Control Bureau’s (NCB) zonal director Sameer Wankhede. He has alleged Wankhede of partnering with some BJP leaders in an extortion attempt in the Aryan Khan case. Besides this Malik has levelled several other charges against Sameer and BJP. This has led to a series of allegations and counter-allegations.

Meanwhile, Malik has rubbished the allegations. He said that baseless allegations have been levelled against him to malign his image. Nawab Malik added that he did not know underworld don Dawood Ibrahim’s sister Haseena Parker.