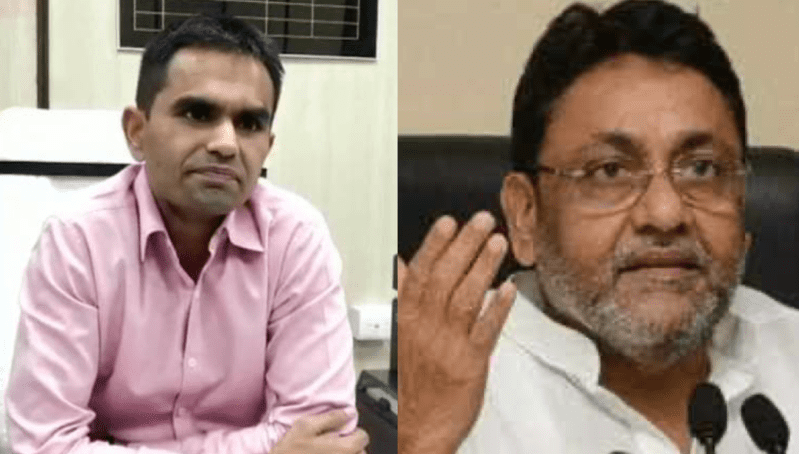 The NCB officer, who dared to take action against celebrities and influential people in Mumbai, has been shown the door.For some, this was expected to happen sooner or later.

It all happened following sweeping allegations of Maharashtra minister Nawab Malik. Nawab’s son-in-law was caught in a drugs case this year.
After Aryan Khan’s arrest, Nawab almost everyday issued statement against Sameer Wankhede. Most of these allegations were personal in nature. They were about his vacation, family members and religion.

Wankhede has been transferred from the Mumbai zone of the Narcotics Control Bureau. His new assignment is to a central team of the agency. Hence,  Sameer Wankhede, zonal director of NCB, will no longer supervise Aryan case probe.

He has been taken off from five other cases, including the one pertaining to minister Malik’s son-in-law. Sanjay Singh, the deputy director general of the central unit of the NCB, will now take care of these cases.

“A special investigation team (SIT) comprising officers from Operations Branch of Narcotics Control Bureau (NCB) Headquarters has been constituted by the Director General, NCB to take over a total of six cases from NCB Mumbai Zonal Unit. No officers have been removed from their present roles and will continue to assist the Operations Branch investigation as required… It is reiterated that the NCB functions across India as a single integrated agency,”

official statement of the central agency.

Ironically, around the time Aryan Khan was released on bail, the investigation of the cases was taken from Sameer. It will certainly discourage Wankhede.

The NCB had started a probe against Wankhede after allegations of extortion. These allegations were levelled against him during the course of investigation in the Mumbai cruise drugs case.

However,  Sameer Wankhede told the media, he has not been removed from the investigation. It was his writ petition in court that the matter be probed by a central agency. Thus, the cases are being probed by Delhi NCB’s SIT.

Following this, Malik tweeted, “This is just the beginning. A lot more has to be done to clean this system and we will do it.”The Nationalist Congress Party leader today levelled new allegations against Wankhede of a plot to kidnap Aryan.

An independent witness in the Mumbai cruise drugs case, Prabhakar Sail started the controversy. He alleged that Rs 25 cr was demanded on behalf of Wankhede to release Shahrukh Khan’s son Aryan. Aryan was arrested on October 3 and released on bail on October 30. Prabhakar Sail had also alleged that he was made to sign blank papers by NCB officials.

Sameer has rubbished these allegations by Prabhakar Sail.  Wankhede came to limelight last year when the NCB interrogated several Bollywood actors for their alleged links with drugs.

Even when he was in customs department of Mumbai Airport, he fearlessly performed his duty. He has a reputation of no non-sense officer. He does not think twice before taking action against big names.
Wankhede once caught singer Mika Singh with the foreign currency. Also, during his duty in 2011, he ensured the World Cup was released from the airport only after paying duty.

Wankhede’s father Dhyandev Kachruji Wankhede, has filed a defamation suit against Malik in the Bombay High Court.
His advocate said Malik has been calling the Wankhede family “fraud and questioning their religious beliefs, saying they are not Hindus”.
The suit said, the minister “irreparable loss, damage, harm, prejudice to the name, character, reputation and societal image of plaintiff and his family members”.