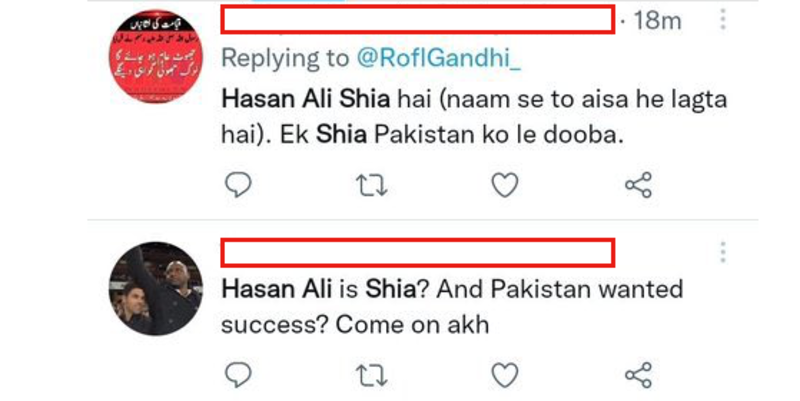 Well, this can happen only in country called Pakistan. Pakistanis are threatening and abusing Cricketer Hasan Ali along with his wife. They are harassing him on the grounds that he is a Shia Muslims.
Australian cricket team has beaten Pakistan five wickets. As a result, Australia spoiled Pakistan’s dream of making it to the final of the world cup. But, the loss did not got well with the Islamic population of the country. Pakistan is already notorious for breaking TV sets after a losses in games.
They are putting the entire blame of the loss on Hasan Ali. Pakistanis are accusing him that he deliberately dropped a catch during the Pak-Aus thriller. According to them he did it due to his religious persuasions.

Pak citizens did not spare his wife. His wife is of Indian origin. They flooded twitter with hateful and demeaning slurs on Ali for being a Shia.
Hits and misses are part of the game, but by linking it with religion, the neighouring country’s people have shown their sick mentality.

Another Tweeted, “Hasan Ali is Shia and Pakistan wanted to win. Come on akh.”

Hidayah Ansari, Tweeted, “Hasan Ali Shia hai, ek Shia Pakistan ko le dubega.” Adil Shamsad, said, “Hasna Ali, can you die please.”
Besides, there were many other who posted abuses and threatened him and his wife.

Author Anand Ranganathan, Tweeted, ” Shocking to see how Hassan Ali is being targeted and viciously abused by his fellow-Pakistanis just because he is Shia and his wife an Indian. Winning and losing are part of life. Besides, the Pakistanis should know that Jinnah was a Shia and an Indian. I stand with Hassan Ali.”

“Just a small glimpse of the awful abuse Hassan Ali is receiving. First the Pakistanis targeted and abused our beloved Mohd Shami, conveniently allowing some useful idiots this side to run their propaganda, and now they are targeting and abusing their own. Vile bigots,”he added.

Suman Kumar, tweeted, “Some Pakistani puppies are trolling their hero #Hasan_Ali. He is #ShiaMuslim that’s why trolling them.”

Another Tweeted, “I’m deeply anguished to see how people are targeting #Hasan_Ali just because he is Shia Muslim. You deserve our love-compassion & respect, ignore the abuses & threat from bunch of Spineless Sunni Muslims. This is not the Pakistan of Gandhi-Jinnah’s dreams.”

Vishu, said, “The kind of pressure, struggles & sacrifices a player has to go through for his country & his people is immeasurable. @RealHa55an is a star & indeed of the best bowlers in the world. Please respect your stars. This game should bring people together & not divide”