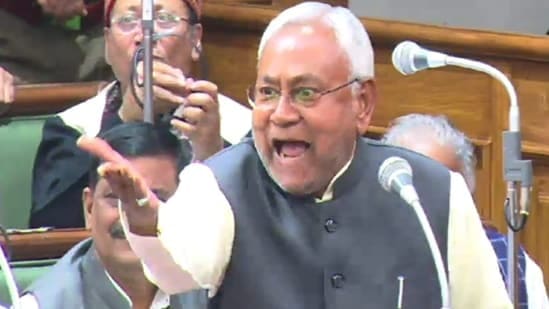 Patna (Bihar): Never did the people watch Bihar Chief Minister Nitish Kumar throwing tantrums, in a fit of frustration!! But they did so a couple of days back. His show of displeasure in Bihar Legislative Assembly over hooch tragedy in the state made steaming headlines. On social media too, people discussed it in their inimitable “Hinglish” way. Anger of CM Nitish erupted on Vijay Kumar Sinha. Vijay became the Leader of Opposition, after the alliance between JDU and BJP ended.

On the surface, it might appear that CM Nitish is venting his ire on Sinha, but that’s not the case. There is a different and interesting story to it. And it is very easy for Biharis, who have a nose for politics like none others in India, to understand.

By poll that Nitish lost

The story begins with the defeat that the ruling Mahagathbandhan suffered in Kurhani bypoll at the hands BJP. Now, BJP is the party CM Nitish broke up with barely four months ago. Not only this, PM Narendra Modi rubbed salt to his wounds. Addressing BJP workers at party headquarters in Delhi, PM Modi made a statement. He stated that BJP’s win in Kurhani bypoll was an indication of times to come in Bihar.

What PM Modi meant by this? The BJP was down in the dumps in Bihar after Nitish stripped it of power. This was after Nitish Kumar broke up with BJP and formed an alliance with RJD to form the government. BJP, which is the second largest in terms of numerical strength in the assembly, was predictably upbeat over the win. It had raised its tally to 78, just one less than that of the RJD. This is a massive win, considering that the JDU had fielded not one, but two dummy candidates to buttress its own position, which proved to be of no avail.

It was also a gigantic win for the BJP as Vikassheel Insan Party (VIP) and Assaduddin Owaii’s AIMIM strategised to make a dent in BJP’s core support base by fielding a Bhumihar Nilabh Kumar and a Muslim candidate Mohammad Ghulam Murtaza, a known aide of JDU’s Manoj Singh Kushwaha. On paper, a seven-party alliance also meant that there was no threat of the ruling party votes getting split, but it all failed.

What the defeat means for Nitish Kumar?

The defeat is a referendum of sorts for the Mahagathbandhan in Bihar. And it has ramifications on the government and the alliance in future as well. It will also be seen as defeat of stringent Prohibition and Excise policy of Nitish Kumar. Kedar Gupta had won the same seat as a BJP candidate in 2015, but lost it when he contested as NDA candidate to RJD’s Anil Sahni who was later disqualified after getting jailed in a corruption case.

Gupta’s win will only encourage the detractors of CM Nitish Kumar within the alliance and make him rethink on the Prohibition policy itself. But will he, considering his opportunist instincts and dumping anyone and anything for his convenience and victory.

The liquor policy of CM Nitish kumar has robbed the employment of a majority of SC community, which forms 18 percent strong vote bank. When resentment of this community is enough to hand defeat to Mahagathbandhan in this byelection, what would be its impact in the next assembly elections? Obviously there will be pressure on him to rethink his harsh policy. Unfortunately for Nitish, a rethink is also going to pose another problem to him whose women vote bank swelled due to the ban on liquor.