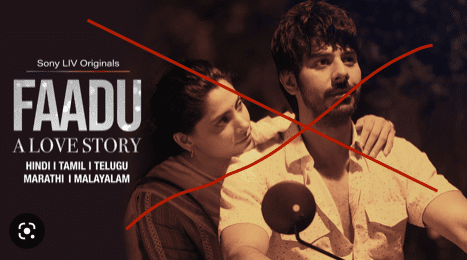 Apparently, web series producers find Hinduphobic content a good proposition. It earns them publicity, at no cost. Latest to join the hall of shame is a series titled ‘Faadu – A Love Story’. It is currently running on ‘Sony LIV’. The instance in question involves Lord Ganesh, considered the deity of prosperity and happiness by Hindus.

The Hinduphobic scene in contention here is where the heroine’s father is listening to Urdu poetry of a poet called Ghalib. He is listening to the poetry while he is praying to Lord Ganesha. The poetry includes mentioning of Kaaba (a Mosque) and Kalis (a church). The character is doing so to have a positive exam result for his daughter.

At this point of time a person stops the poetry. To this action, the father retorts by saying he was playing the song for Lord Ganesha to listen to bring an element of humour. Ashwini Iyer Tiwari is the director of the Faadu web series and Soumya Joshi is the writer.

Faadu is not the first such web series and nor won’t be the last to offend Hindu sensibilities. Apparently, Hinduphobic content panders to the interests of a particular lobby. It looks like as if there is a nefarious nexus to constantly demean Sanatana Dharma.

Will these web series makers dare to turn the tables? Can they muster courage to show a scene where a Hindu religious mantra is played in a church? Or for that matter, a mosque? Is there a bigger plan to efface the oldest culture?