For the up coming Karnataka state elections, BJP is planning to use the clout of Bommai, Modi and Yediyurappa along with social engineering. 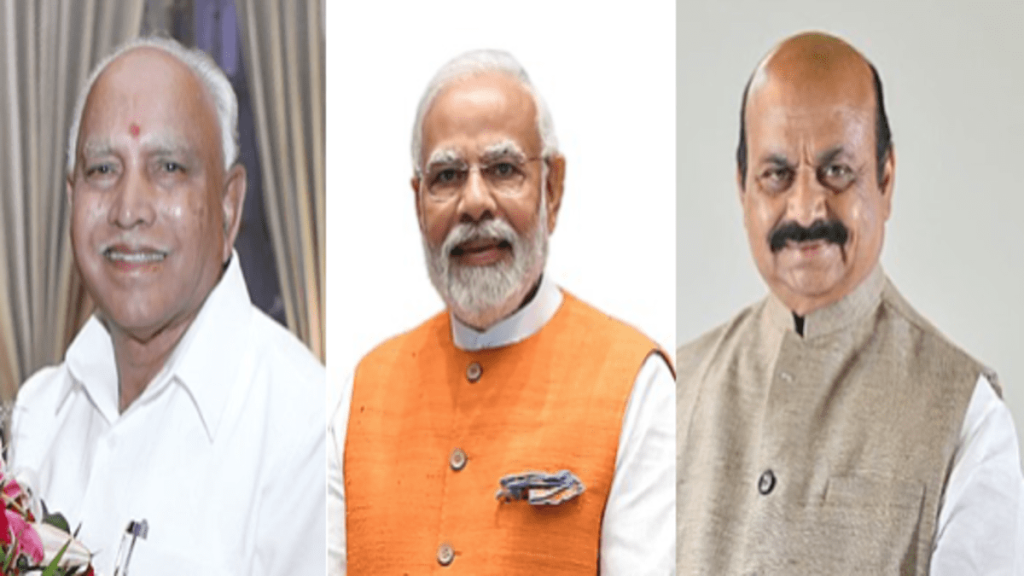 BJP central party leadership is silently working on a “Modi-Bommai-BSY” strategy. The aim is to win this year’s assembly elections in Karnataka with a clear majority. This comes amidst unsubstantiated media reports of BS Yediyurappa is unhappy with the party for sidelining him.

Not to miss a point, Yediyurappa is very much in the scheme of the things. The scheme is to win it big with the help of Karnataka Chief Minister Basavaraj Bommai and Modi. Other factors are Prime Minister Narendra Modi, social engineering and reservation quota, among others.

Why Yediyurappa is important?

The BJP leadership made Yediyurappa, a member of its highest and most powerful decision making body (Parliamentary Committee). The aim is to use the political outreach he commands in Karnataka politics. BJP got a chance to form the government when BSY was made the Chief Minister in 2019.

Not only this, the BJP is also aware of the damage it can cause to itself  by ignoring Yediyurappa. The party had suffered when he quit the party to form his Karnataka Janata Paksha. BJP could secure a paltry 40 seats in the 2013 elections. The Lingayat strongman had formed his party after BJP asked him to step down from chief minister’s post on corruption charges.

Not to forget, BJP replaced Yediyurappa with Bommai as the chief minister in 2021. The objective was to make purposeful inroads in Old Mysuru region, keeping in mind the slicing of JDS hold on Vokkaliga voters since 2014 Lok Sabha election.

Bommai’s coronation has its own potential. After all, he was the political secretary of former prime minister HD Deve Gowda in his heydays at Janata Party. Therefore, he has a rich experience of strong and weak points of the JDS. This will come in handy during these elections. Whether this will work in favour of the BJP, only time will tell.
However, the BJP has chalked out a strategy to woo the Vokkaliga voters this time. This is in contrast to previous occasions when it predominantly focussed on Lingayat votes.

On the social engineering side, the BJP very much understands the importance of Dalit and Vanvasi voters. Every section acts as a deciding factor in elections. Karnataka has 51 reserved assembly seats reserved for these communities in the state.

In view of this, BJP’s efforts to woo tribals have become all the more important. BJP’s inclusive nature is indicated by its election of Droupadi Murmu as the President of India.

Modi government, in its second term, has withdrawn proposals to amend the Indian Forests Act, 1927. Similar is the case with and the Cigarettes and Other Tobacco Products Act, 2003. Both these proposals were facing opposition from tribal groups and outfits.
The government also increased budgetary spending on tribal welfare and gave a push to agroforestry and natural farming.

The Modi government is also wooing those Dalit factions that have been the votebank of the Congress. On January 19, he distributed title deeds to over 52,000 eligible beneficiaries from the Lambani nomadic tribes residing in northern Karnataka. This was a world record of sorts for an event.

Clearly, with these efforts, the BJP is trying to endear itself to the tribal and Dalit voters. How much this will pay off remains to be seen. Besides, the BJP is also confident of benefitting from the split of Muslim votes between the Congress and the JDS.

Not only at the macro level, the BJP has also launched an aggressive election campaign at micro level in the state. It aims to strengthen the organisation at all the booths of the state. Moreover, it also wants to reap electoral dividends through Vijay Sankalp Abhiyan yatra with an aim to conduct door-to-door drives and connect with people.

As far as the disgruntled Karnataka BJP leaders are concerned, the BJP is working on a strategy to appease them by inducting them into a campaign committee to be formed, as per party insiders.