UCC is part of directive prinicples of constitution. Former PM HD Deve Gowda has said that he stands by the constitution on UCC, when asked. 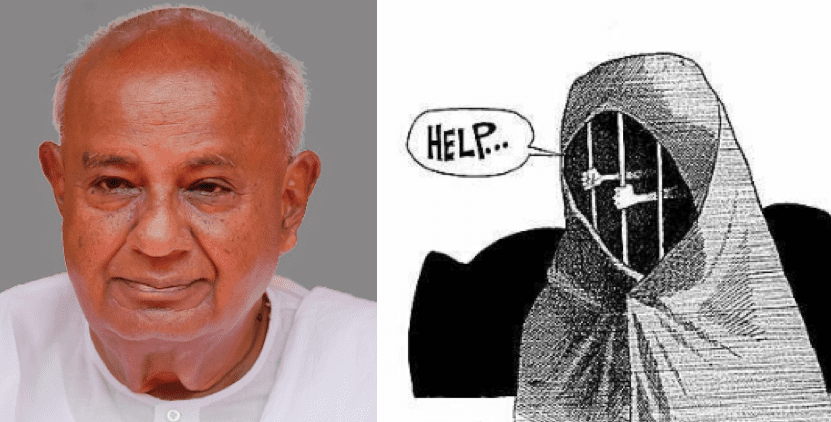 Mysuru: The former Prime Minister and JDS supremo HD Deve Gowda on Thursday said it is not so easy to introduce Uniform Civil Code given the opposition to it, but did not overtly say it is an impossibility.

“It is not so easy. Of course, there will be opposition,” he told reporters replying to a query on the issue.

Asked if it would benefit the BJP, Gowda said: “… If you consider the Constitution, then BJP will have to struggle a lot to implement the UCC.”

Asked if he was against UCC, Gowda by gently nodding his head said: “I will stand by the Constitution.”

It will be worth decoding Gowda’s diplomatic statement. Let’s find out what the Constitution says about UCC? Some of the features contained in Union Home Minister Amit Shah’s interview at the Times Now Summit on November 25.

He had said, “Not only the BJP, the Constituent Assembly had also advised Parliament and states that UCC should come in the country at an opportune time.”

“For any secular country, laws should not be on the basis of religion. If a nation and states are secular, how can laws be based on religion? For every believer, there should be one law passed by Parliament or the state assemblies,” Shah had said.

Shah had also said that the UCC has been a promise of the BJP since its Bhartiya Jan Sangh days.

What Dr Ambedkar and others say on UCC?

In fact, the Constituent Assembly on 23 November 1948 overwhelmingly voted in favour of UCC being part of the Constitution.

Dr BR Ambedkar, who the Leftists and Congress rake up his name to target BJP, had strongly favoured UCC.

He said: “I think most of my friends who have spoken on this amendment have quite forgotten that up to 1935 the North West Frontier Province was not subject to the Sharia.”

“It followed the Hindu Law in the matter of succession and in other matters, so much so that it was in 1939 that the Central Legislature had to come… And abrogate the application of Hindu Law to Muslims of the North West Frontier Province and to apply the Sharia to them,” he said.

Ambedkar further added, “I quite realise their feelings in the matter, but I think they have read rather too much into Article 35, which merely proposes that the state shall endeavour to secure a civil code for the citizens of the country.”

Making his submissions before the Constituent Assembly, KM Munshi also favoured UCC. He had said that personal law is not a part of Islam, but fostered by British courts.

“This attitude perpetuated under the British rule that personal law is part of religion has been fostered by British courts. We must, therefore, outgrow it,” Munshi argued.

He also sumbitted that even the Muslim invader Allauddin Khilji had made several changes to Sharia.

Munshi said: “If I may just remind the honourable member who spoke last of a particular incident from Fereshta, which comes to my mind, Allauddin Khilji made several changes to the Sharia ….”

“The Kazi of Delhi objected to some of his reforms. And his reply was, ‘I am an ignorant man and I am ruling this country in its best interests. I am sure, looking at my ignorance and my good intentions, the Almighty will forgive me, when he finds that I have not acted according to the Sharia’,” he added.

“If Allauddin could not, much less can a modern government accept the proposition that religious rights cover personal law or several other matters which we have been unfortunately trained to consider as part of our religion,” Munshi said.

So, the Constituent Assembly overwhelmingly voted in favour of UCC. It is a part of the directive principle of Constitution. Is Ex-PM Deve Gowda supporting it by saying that he stands by the Indian Constitution on this matter?

So it seems. Hopefully, it is not just an opportunistic political statement.