Workers of portal 'The Wire' tried to run down Akshay Kumar for his disapproval of Richa Chadha's disparging comments about Indian Army. 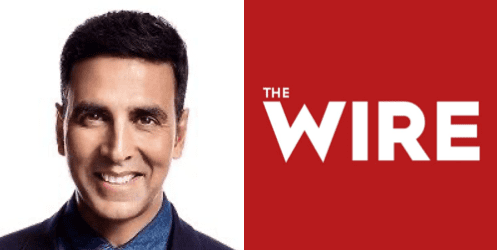 Actor Akshay Kumar had to face the onslaught of leftist media and some alleged journalists. His problem started when he disapproved Richa Chadha for trying to discourage Indian army.

It all started with a tweet. Akshay tweeted, “Hurts to see this. Nothing ever should make us ungrateful towards our armed forces. Woh hain toh aaj hum hain.” The last sentence means – We exist due to their presence.

Richa Chadha had made these deplorable comments in one of her tweets for which she was slammed by netizens. Later she apologised for her tweet. In a way, Akshay Kumar reacted just like many angry Indians. He was as upset as most of us.

The stable of The Wire

But surprisingly, Akshay’s tweet did not go down well with a cabal of alleged journalists. Leading the malicious attack was Rohini Singh. She tried to undermine Akshay Kumar’s credibility by snide remarks about his Canadian passport.

What is ironic about Rohini questioning about Akshay Kumar’s patriotism is that she herself works for ‘The Wire’. An American citizen Sidharth Vardarajan is the founding editor of the propaganda portal called ‘The Wire’. He is also the editor in chief of the website.

Not to be left behind, another worker of Sidharth Vardarajan’s website also chipped in. She used platitudes like ‘Asking questions is the greatest act of patriotism’ etc. Readers were at a loss to understand, what kind of questions had Richa Chadha asked! She had just made a snide remark at Indian army and was so ashamed that she apologised for it. And, of course, she used the typical leftist word ‘fascist’ to make her remark more lofty.

Taking a cue from Rohini Singh, another alleged journalist Saba Naqvi went a step further. She tried to spin the issue into Indian vs Canadian. Her tweet read:

In solidarity with Indian citizen @RichaChadha. No time for Canadians

Going by this logic, one should take a stand based on the nationality of the person. Individual merit or deeds should be rendered to second position. Hopefully, we as a nation have more sense then these propagandists masquerading as journalists.

Even some Congress politicians also tried to defend Richa’s contemptible comments. They also tried to deride Akshay Kumar by calling him a Canadian. For example, a member of INC tweeted:

A Canadian preaches Indians about their Military and India celebrates the Canadian. Should I laugh or cry?