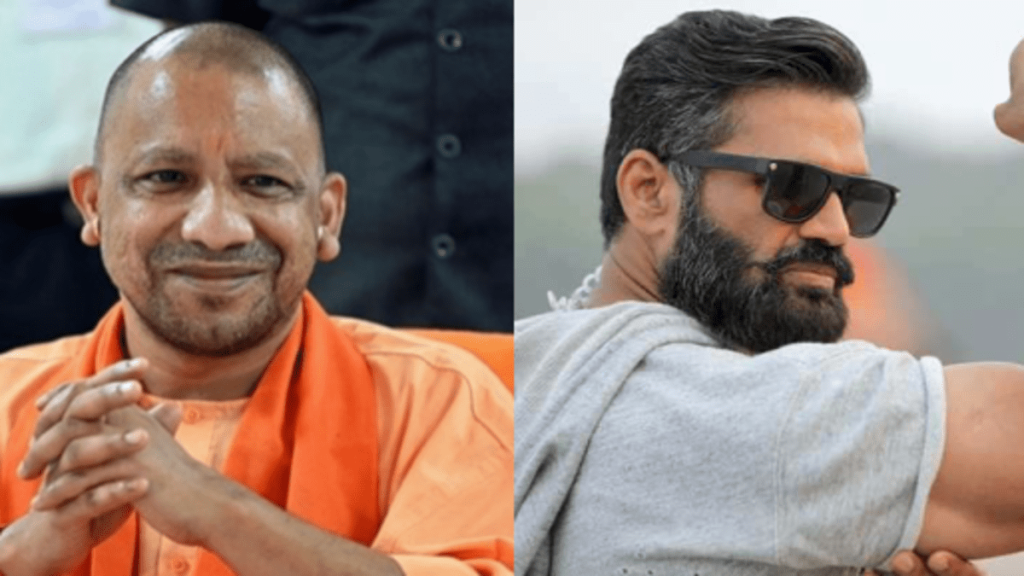 Apparently, the ongoing ‘Boycott Bollywood’ trend, especially via social media seems to be working. Top Bollywood actor Suniel Shetty has requested Uttar Pradesh Chief Minister Yogi Adityanath to rescue the industry. He asked the much respected CM of UP to get rid of this trend.

During the discussion, Shetty took up the cause of Bollywood. As per reports, he told the UP CM ‘Boycott Bollywood’ trend can stop if he says something about it. He further urged the CM to seek Prime Minister Modi’s support in clearing the stigma around Bollywood.

Claiming that 99 per cent of the people in Bollywood are good, he requested Yogi to take the lead and talk to the PM about erasing this stigma.

“We have to make people understand that most people in the industry are good. We don’t do drugs, we don’t harm others..I request you to be the person to abolish the stigma….you’re a very big name, sir. If you talk about it, people will listen,” the actor told Yogi while emphsising that the film industry has played a major role in connecting India with the world.

Shetty argued it is wrong to label the entire industry in a poor light because of “one rotten apple”.

The Boycott Bollywood hashtag gained prominence following actor Sushant Singh Rajput’s death in June 2020. His fans and other movie goers were aghast at the shocking and unexpected news.

They slammed the nepotistic nature of the industry and the gate-keeping attitude of top banners. Many blamed some bollywood stars for his death. Drugs in the film industry was also slammed.

Another reason for the “Boycott Bollywood” trend is the anti-Hindu bias in the movies. It appears as if bollywood is in grip of the leftist-liberal-islamist mafia.

Anurag Kashyap directed “Dobaaraa”, Vijay Deverakonda-starrer “Liger”, and Ayan Mukerji’s big-budget fantasy adventure ‘Brahmastra: Part One Shiva’ too had to face the backlash. Liger and Dobaaraa did not do well in theatres. Bollywood analysts accept that Boycott Bollywood trend is cause of failure of these movies.

Om Raut’s movie on Ramayan too faced criticism for not depicting main characters the way they are perceived to be. Following which he had to delay the film release by six months to make changes.

Latest target is Shah Rukh Khan’s upcoming film “Pathaan” which had a negative publicity due to objectionable ‘Beshram rang’ video song featuring Deepika Padukone and Khan. Shah Rukh Khan’s whitewashing of Islamic terror via ‘My Name is Khan’ has not gone down well with thinking audiences. If Bollywood does not change its old habits, Boycott Bollywood might disrupt the industry.