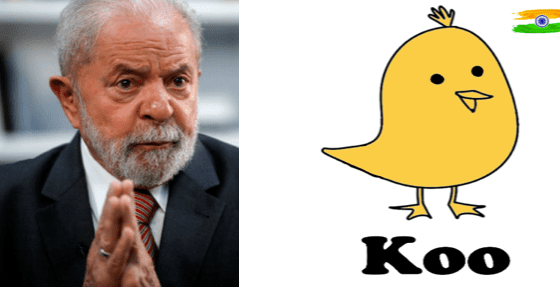 Bengaluru: Lula da Silva, Brazil’s President-elect announced his arrival on the Indian microblogging platform Koo on December 1. His first post in Portuguese said, “Cheguei. O que estão achando daqui? It translates to, “I have arrived. What are you looking for here?”

He got over one lakh and three thousand followers within two days of joining and his first Koo got over 33,000 likes and over 10,000 comments. Lula will take over as the next President of the Federal Republic of Brazil. He announced his Koo profile on Twitter with a yellow bird emoji and got over 100,000 likes on his Tweet. Lula’s presence on the app affirms his intent of utilizing popular digital tools to connect with Brazilians at large.

He is the latest eminent personality from Brazil who joined the platform that boasts of names like former football player Ronaldinho, Felipe Neto, Claudia Leitte, actor Babu Santana, and author Rosana Hermann and the popular news portal Choquei.

We are delighted: Koo

Aprameya Radhakrishna, CEO and Cofounder of Koo, said, “We are delighted to have Brazil’s President-elect Lula Da Silva on our platform. Koo is a brilliant platform that welcomes different perspectives, voices and opinions. We pride ourselves in being a truly democratic platform that helps everyone form connections and share updates with their followers.”

“I’m sure, Brazilians all over the world would want to know the president-elect’s plans for the nation directly from him. We feel honored and humbled by the love shown towards Koo by Brazilians. And we will continue to provide a platform for people to express and enjoy the benefits of a true microblog for free. We don’t believe in charging users,” he said.

Mayank Bidawatka, Co-founder, Koo said, “We are very happy to have President-elect Lula on the platform. He’s got a large following in Brazil and that shows in the comments of Brazilians in his first post. He’s a world leader and this is the start of many more to come.”

Koo team had launched the app in Brazil about 2 weeks ago. They introduced Portuguese as a language on the app within 48 hours. After they enabled the language feature, 500 eminent personalities from Brazil joined the world’s second-largest microblogging platform. Today, Koo has recorded over 2.5 million downloads and over 2 million web visits from Brazil since its launch.

MLK feature of Koo is a game changer

Koo App enables conversations in multiple languages. It Started in India, but today people from over 100 countries are using it. The Multi-Language Kooing (MLK) feature on the app enables users to Koo in one language and share it with other users in other languages that Koo offers. It leverages language to create an enabling platform for global conversation and expression. It also has many features that Twitter doesn’t, like – ability to edit a post anytime, up to 10 profile photos, upto 10 image attachments, longer video attachments, audio and video recording, ability to save a post besides many others.

Koo is available in 11 languages, including Portuguese, and has users all over the world. Since its launch, the app has awarded over 8,000 account verifications (yellow tick) and thousands of green self-verification ticks, thus increasing transparency and credibility.

It has over 50 million downloads in India and 2 million plus in Brazil. People of eminence across politics, sports, media, entertainment, spirituality, and art and culture are actively leveraging it to connect with their followers in multiple languages.

The Koo app was launched in March 2020. Since then, it has become the second largest microblogging platform available to the world. An innovator of language-based microblogging, Koo democratizes people’s voices, empowering them to share their thoughts and express themselves freely in a language of their choice through their immersive language experiences.

Several countries are using Koo on their app and web platforms.