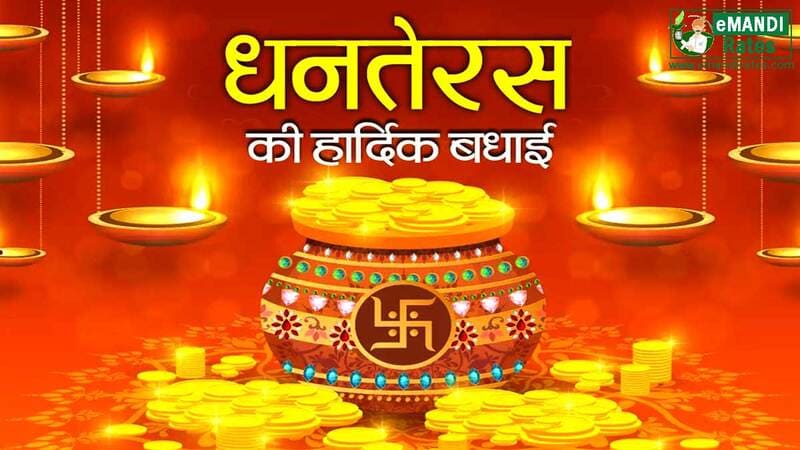 The auspicious festival of Dhanteras will be celebrated on November 2, 2021. It is one of the numerous colourful festivals of Hindus.

The word Dhanteras consists of two parts – “Dhan” and “Teras”. “Dhan” means wealth, prosperity, financial health and money & “Teras” means thirteen. It refers to the date or “Tithi” because it is celebrated on thirteenth day of the lunar waxing phase or “Krishn paksh” of the month Ashwin. Thirteenth day is also called “Trayodash” in Sanskrit therefore, it is also called Dhantrayodashi.

According to Hindu traditions, it is the day on which Dhanvantri, the cosmic healer manifested. Bhagwãn Dhanvantri is considered an Avtãr (incarnation) of Vishnu, the creator of Brahmãnd or universe.

The Devas and Asuras, were churning the cosmic ocean. Devas are the benevolent forces and Asuras are the malefic forces and the churning is called “Samudra Manthan”. During this Manthan, Dhanvantri appeared with a Kalash (pot) of Amrit (nectar of immortality) in one hand and Ãyurved in the other.

Dhanvantri is considered the healer of not only humans but of all life forms. Ãyurved is the Hindu knowledge system of healing. It is entirely different from the current system as it takes a holistic approach to treat ailments and diseases. Therefore, this day is also celebrated for well-being of all family members.

The Government of India has started celebrating this day as Ãyurved day. The intent is to reduce dependence on toxic medications as they have serious adverse effects on human body. As a result, a switch from current practices to Ãyurvedic system of treatment can provide better quality of life. It will also result in lesser burden on the already over-burdened health infrastructure.

On this day Government of India conducts special drives and programs to spread the message of significance of Ãyurved.

How and when of Dhanteras

Like most of the Hindu festivities, there is a specific time called Shubh Muhurat for the worship. This year the Shubh Muhurat is from 5:42PM to 7:31PM. The method or Pooja Vidhi is to buy new utensils or jewellery (gold or silver). These items are offered to Bhagwãn Dhanvantri and the family members pray for the well-being of the entire family and household from the cosmic healer.

The Hindu mind understands that a human is so insignificant that he can not offer anything to the Supreme being.The purpose behind offerings is to inculcate the thinking that we should not become arrogant and always remember that we are just tiny beings in the over-all cosmic play.