Owaisi’s Islamic threat Vs Haridwar Dharm Sansad: Are they comparable? 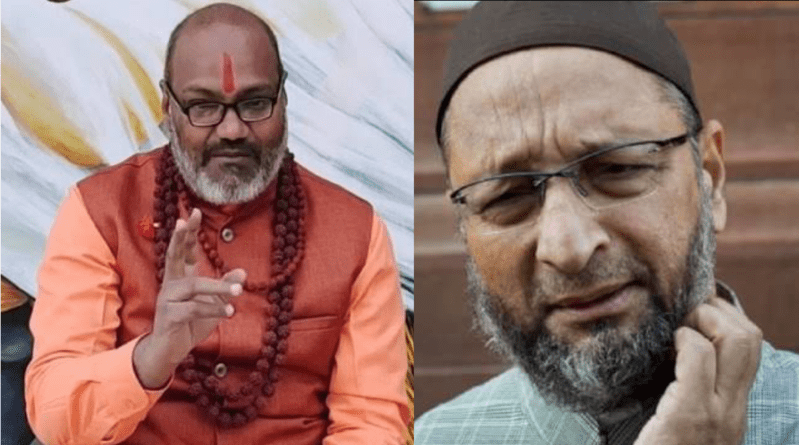 Asaduddin Owaisi has once again made an inflammatory statement. It was more of a threat to the police force than a statement. In his election speech, a couple of days ago, he threatened the UP Police with retribution.

In his speech, Owaisi said that we are not acting today due to circumstances. But, we Muslims will remember your ‘Zulm’ (excesses). Yogi will not be a CM forever, Modi will not be a PM forever. Wrath of Allah (Quranic God) will destroy you and we Muslims are not going to forget it. Once the circumstances change, then who will protect you? The circumstances when Yogi will be back in his Matth and Modi will retreat to mountains? Then who will come to save you?

This is a very serious threat because it is a hate speech particular addressed on communal lines. Not surprisingly, most of the established media outlets are trying to deny or underplay the statement. A few are trying to equate it with the utterances of some Hindu leaders. Some Hindu leaders had organised an event called Dharm Sansad from 17-19 December in Haridwar.

Some of the speeches delivered in Haridwar can be called anti-Muslim. There was frantic twitter activity to denounce these statements. Obviously, no law abiding person will condone such statements, including the author of this article.

Equating the threats issued by Owaisi with the anti-Muslim diatribe in Haridwar will fall under a fallacy called “false equivalence”. At least on three counts.

The Butcher of Bengal

One, Asaduddin Owaisi is a political leader and a Member of Parliament. He is on a constitutional post. By issuing such threats he has lowered the dignity of the office he holds. Moreover, he is in a position of power. That means he has the resources to put his words in action.

To understand this we can look at the recent history. We have the example of the “Butcher of Bengal”. We call Huseyn Shaheed Suhrawardy, the Prime Minister of Bengal during 1946-1947 by that name. He was responsible for the infamous Calcutta Killings. He oversaw murders of Hindu men and rapes of countless Hindu women.

Two, Owaisi is invoking an ideology that is inherently violent. It has a long history of murders and genocide. In order to understand this point, let us get to the historical context. Hindu civilisation has been under attack from Islamic invaders for about fourteen centuries.

The Islamic doctrine of Jihãd was the driving force for most of these invasions. Since then, Hindu civilisation has been shrinking at the expense of Islamic expansionism. American Historian William Durant has summed up this civilisational struggle.

The Islamic conquest of India is probably the bloodiest story in history. It is a discouraging tale, for its evident moral is that civilisation is a precious good, whose delicate complex of order and freedom, culture and peace can at any moment be overthrown by barbarians invading from without or multiplying within.

When Jinnah called for direct action day in 1946, he was using this Islamic doctrine to cleave Hindu land by violence. Asaduddin Owaisi is also using similar rhetoric.

Apart from that it highlights a very important aspect of Islam. That, it is a political ideology of expansionism and supremacy, disguised as a religion. It will keep on trying to encroach on non-Muslims.

Quranic concept of Zulm and Zalim

The central text of Islam is a book called Quran. It openly talks of war with non-Muslims till every one becomes a Muslim and worships the Quranic God called Allah. For example verse 193 from Chapter 2 of Quran states that

And fight them until there is no more Fitnah (disbelief and worshipping of others along with Allah) and (all and every kind of) worship is for Allah (Alone). But if they cease, let there be no transgression except against Az-Zalimun (the poytheists, and wrong-doers, etc.)

Notice the term ‘Zalimun’ which the translators have quoted in parenthesis as polytheists. It is an Arabic term. According to rules of Arabic language, ‘un’ is used as a suffix to denote plurality. Thus, plural of Zalim becomes Zalimun. Most of the Hindus think that Zalim is someone who displays cruel behaviour towards someone. But, Islamic theology has an entirely different meaning of Zalim.

As per Mohammedan doctrine, every non-Muslim is Zalim. The mere fact that he is anon-Muslim is sufficient to declare him a Zalim. Quran mentions this at numerous places.

O you who believe! Spend of that with which We have provided for you, before a Day comes when there will be no bargaining, nor friendship, nor intercession. And it is the disbelievers who are the Zalimun (wrong-doers, etc.).

Here the translators have translated the word Kuffar (plural of Kafir) as disbeliever. Let us look at another verse from Quran

We shall cast terror into the hearts of those who disbelieve, because they joined others in worship with Allah, for which He had sent no authority; their abode will be the Fire and how evil is the abode of the Zalimun (polytheists and wrong-doers).

So, when Asaduddin Owaisi is talking of Zulm, we should know its meaning and context.

Back in eighties and nineties, the Ram Mandir movement was at its peak. A Sadhvi had given a speech exhorting Hindus to be prepared for self defence. She was saying that today you will find a Maruti worth one lakh rupees in the garage of a Hindu household. But, you will not find even a wooden stick to ward of a stray dog entering the same house.

I remember my parents making all the right noises. They agreed with what she was saying. But today, 30 years later, the situation has changed little. Now, there is a more expensive car in the garage but still no stick to ward off a dog. That is the state of Hindu community. Therefore, fiery speeches by someone don’t convince Hindus to take action.

Hate speech or pent up frustration

None of these shameful incidents has given rise to a Hindu terrorist organisation. There is no Hindu counterpart to ISIS, Al-qaeda, Boko Haram, Muslim Brotherhood, Hamas, Indian Mujahideen, Lashkar-e-Toiba, JKLF, Jaish-e-Mohammad. We have seen Quran chanting terrorists but no such Hindu equivalent.

And yet, a part of media is giving more decibel level to hate “speech”, all the while ignoring or underplaying violence against Hindus. Khalistanis Lynch a Hindu but no-one files a case against the perpetrators. Instead, police file a case against the victim. A Muslim mob burns 59 Hindu pilgrims alive in Godhra but media deliberately underplays the monstrosity.

Muslims seduce, groom, rape and kill Hindu girls but media shamelessly denies existence of Love Jihãd. Police promptly arrested Kamlesh Tiwari when he made comments that hurt “religious sentiments” of Muslims. But, the same police was a mute spectator when mobs came out on streets chanting “behead Kamlesh Tiwari.

This asymmetry is visible to an average Hindu. It surely fills him up with a rage. Perhaps, the event at Haridwar is an indication of such pent up emotions.