Muslim girls have been standing out of the class to exert pressure on authorities. 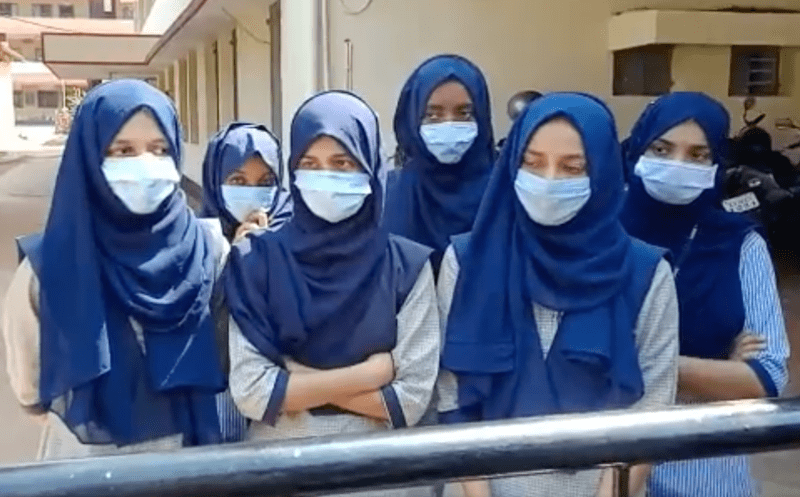 What would be uppermost on the mind of a teenager going to school? Studies or Fun? Or a mix of both? Usually the answer would be somewhere between these options.

But, there is another, more bizarre answer. For a bunch of Muslim girls in Karnataka, dress code of their Mazhab is more important. They are willing to miss their classes but not abide by the regulations of the school authorities.

It has been more than a month when six Mohammedan girls started creating a scene in their school. These students in Udupi, Karnataka, are adamant that they will wear Hijab while attending school classes. The school authorities have told them that they will not grant such a permission. It will disturb the uniformity of the school.

Instead of complying with the norms, they have filed a writ petition in the Karnataka High Court. The petitioner, Resham Farooq, is claiming that wearing Hijab is an essential part of her religion, Islam.

Apparently, it is not a simple issue of few “oppressed” girls. As per reports, the controversial organisation, Campus Front of India (CFI) is supporting the issue. CFI became notorious when Mohammad, one of its leaders was arrested for the murder of a 19 year old student Abhimanyu in Kerala.

The CFI has stated that it will keep on fighting for the rights of Muslim students.

Fortunately, the local political leaders have come in support of the educational institutes. K Raghupati Bhat, the MLA from Udupi has said that the authorities will not permit students to wear headscarves.

We have talked to the parents of the girls. We have told them that if they want to wear headscarf, then they need not come to the institute. It has polluted the atmosphere.