Strong arm tactics by Islamists have irked the non-Muslim students. They have started wearing Saffron scarves to protest against Hijab. 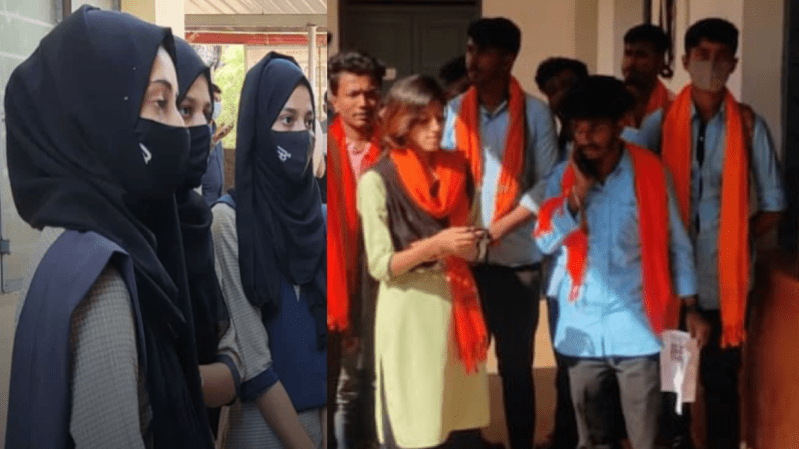 The Balagadi First Grade college in Koppa Taluka is witnessing a stand-off. It all started when some Mohammedan girl students started coming to the class wearing Hijab.

What is a Hijab

A Hijab is part of the Islamic dress code. As per this code, body parts of women should not be visible to men. In Islamic worldview, women who do not adhere to this code are “indecent”.

As per Mohammedan view, no part of women’s body should be visible. Except face and hands. Because, their body parts can excite men. In fact, Islamists have often criticised women for participating in sports and other modern activities.

Several feminists and human rights activists have condemned Hijab as a tool to subjugate women. Ayan Hirsi Ali, the famous activists has termed it as a tool that justifies subjugation of women.

Three years ago, in 2018 also, such a controversy had erupted. The Principal had solved it by convening a meeting with the parents. It was decided that no-one should attend class wearing a Hijab. All participants had accepted the decision. After all, this is twenty first century and we are a progressive democracy. Medieval patriarchal laws have no place in a modern society.

The Principal of the college is Mr. Ananth Murthy. He seems exasperated at the antics of students. His statement gives an indication about the unnecessary controversy.

I have about 30 years of experience and this is my 11th place of work. Dress code was never a concern and it never became an issue. This is the second time I have come across such a situation. It happened in 2018 also and a parents’ meeting was called then. The local representatives and officials who were also part of it helped to pacify the situation.

Ananth Murthy says that recently some Muslim girls started coming to the class wearing Hijab. These Mohammedan students remained adamant even when asked to adhere to the 2018 decision.

As a protest, some non-Muslim students have devised a unique response. They have started coming to the college wearing saffron coloured scarves.

A similar controversy has erupted in a school in Udupi district of the state of Karnataka. Here also, six Muslim girls insisted that they want to attend classes wearing Hijãb.

Soon, Islamist organisations started interfering. Local unit of Islamist political outfit SDPI was the first to intervene. The Udupi president of SDPI, Nazeer Ahmed threatened that they will organise protests if college did not relent.

Girls Islamic Organisation (GIO) of India was not far behind. They met the District Collector and asked him to intervene. As a result, the DC allowed the girls to attend the classes wearing Hijab.

Apparently, this ‘success’ has emboldened the Islamist organisations. Due to which, the same formula is being tried elsewhere.