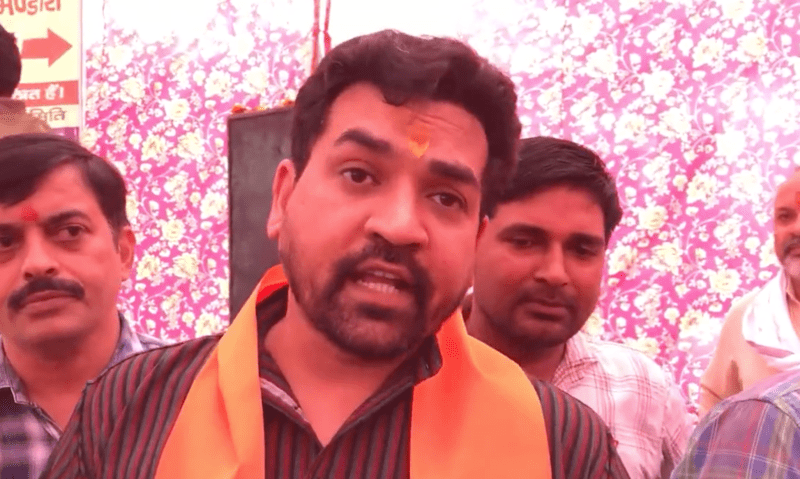 As declared earlier, local Hindus in Gurugram resisted the disturbance that was being created. Govardhan puja was organised by the Sanyukt Hindu Sangharsh Samiti members in Sector 12A. This was the site in Gurgaon where namaz had been taking place every Friday.
The local residents have been facing inconvenience due to holding of namaz on the roads. Several times, ambulances had got stuck as the road was full of people reading namaz.
There has been protests by the local residents against namaz in public places. But there was little response from the government to their pleas. Following which, they decided to hold Govardhan puja at this site. The aim was to discourage people from encroaching public places and causing inconvenience to the people.

BJP’s firebrand leader Kapil Mishra also attended the event and addressed the gathering. He asked the general public to hold religious events at designated places only. He said that the waqf boards has enough land for this.

“Do not use roads for your politics. We had seen it in Shaheen Bagh. They had done a tamasha by blocking all the roads. Has the CAA been revoked? Arteries and nerves, if blocked, stop the body’s movements. Similarly, if roads are blocked, the city and country stops” said Kapil Mishra

“Everyone has equal rights in the Constitution. Blocking of roads cannot be a part of anyone’s religion. It shouldn’t be done. Gurgaon is a metropolitan city renowned world over. Here you will block roads? You will block them in Delhi? This cannot be a part of religion. This is a ploy to stop and disrupt the economy of the country.” – Kapil Mishra

The first right to roads belongs to people who walk on them. Or run their businesses or use them to reach offices, hospitals, schools. And if local residents raise objection, then no one has a constitutional right to sit and block roads. There is no end to this. People from outside come and pray here,” Mishra further said in his address.

“People should pray at their religious sites. In this country, Waqf boards owns the highest amount of land. Make your arrangements to pray there. This issue is not just about Gurugram. Everyone is bothered by it. By doing this (the puja), others will get inspiration that we will have to speak up for our rights. Blocking roads every week is impossible, it is not acceptable anywhere in the world. This won’t be allowed. Blocking people from going to schools, hospitals, places of work… is not an alternative,” he added.

Mishra praised the Hindu bodies for their resistance to this undemocratic practice. “I want to congratulate the people who fought for this freedom. This is the real fight for freedom. Not the one for which slogans of azadi were raised. We need freedom to freely walk on the roads,” he said.

Mishra also spoke regarding a number of restrictions imposed on bursting of crackers ahead of Diwali.

Meanwhile, Mishra also shared the event’s video and retweeted related videos on Twitter. The Samiti had earlier called this trend, nothing but land jihad. They have decided to make it a national movement and awaken people for it.