Govardhan Pooja to take on Namaz nuisance in Gurugram 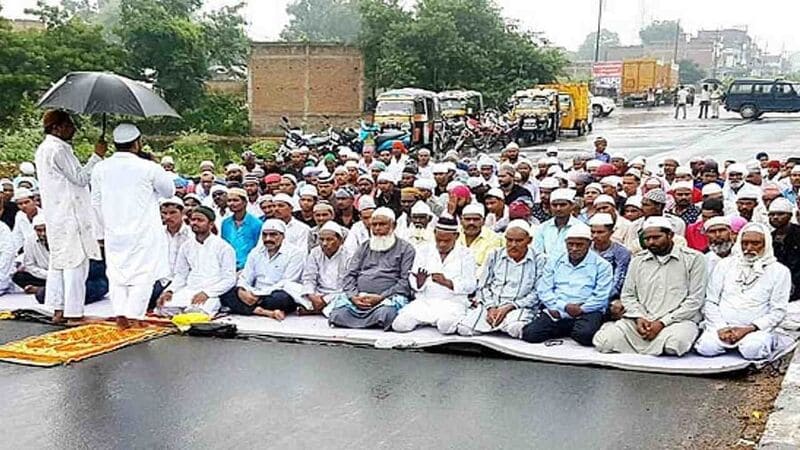 Gurugram citizens are fed up with nuisance being created by some Mohammedans in the name of offering Namaz. They are further irked by the attitude of administration and police. Terming the practice as “land jihad”, the Samyukta Hindu Sangharsh Samiti has asked the Haryana government to issue a notification to ban offering of namaz in public places in Gurugram.

Addressing a press conference, State President of Samyukta Hindu Sangharsh Samiti, Mahavir Bhardwaj said, “The Namaz being held in public places in Gurugram should be stopped immediately. The district administration should stop giving protection to the Muslim community.” He further added, “The administration is misleading the Chief Minister by showing documents without any official’s signature.”
Addressing the journalists, the patron of the committee and former judge Anil Kumar Vimal, clarified many high courts have banned offering prayers in public places. He said a public place is meant for the common citizen and cannot be allotted for the use of any community.
Kulbhushan Bhardwaj, the legal advisor of the committee and former Bar Association president, said, “When the country’s Home Minister Amit Shah has said Namaz in public places is wrong, then why does the Haryana government also not impose a ban.” The Samyukta Hindu Sangharsh Samiti Haryana has mobilized a nationwide movement to stop offering Namaz in public places.

Need of a nationwide movement

Members of Sanyukta Hindu Sangharsh Samiti said, “The government should immediately stop this activity by taking necessary action, otherwise the practice will spread to whole of Haryana. It might as well spread to other parts of India.

Press release of Samiti said, “We will hold a big movement by awakening the Hindu society to stop such illegal and unethical practices. It is nothing but land jihad and religious pressure.”
The press release states that strong action will be taken because it is not limited to only Gurugram and Haryana, such “land jihad” is going on in every corner of the country. It has become extremely necessary to curb this menace that causes nuisance to law abiding citizens.

“The way our campaign is being run in Gurugram by creating a delegation of representatives of non-political Hindus, in the same way, by creating a similar public awareness in the whole of India, a social and religious platform will be formed. This work will be given a concrete shape and now the Hindu society will not tolerate its exploitation,” said the press release.
“In the name of Ganga-Jamuni tehzeeb, a perverted mentality is working in the form of jihad,” read the press statment issued by Anurag Kulshrestha.
Meanwhile, the orgnisation said a grand program of Govardhan Puja will be organised on November 5 in Sector 12 near Gurugram bus stand by the Samiti. Annakoot Prasad will also be distributed on a large scale during the event