The Islamic terrorist organisation Al Qaeda has threatened that it will demolish Ram Temple and build a mosque in the name of Islamic god Allah. 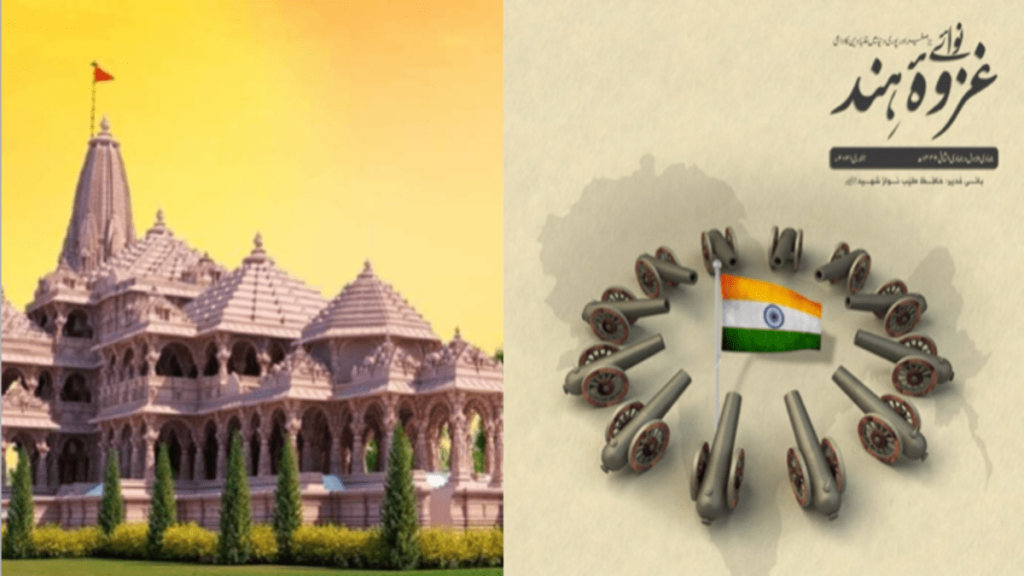 New Delhi: Islamic terrorists have threatened to destroy the under construction Hindu Ram temple at Ayodhya. Islamic terror organisation Al Qaeda has declared this. It has announced this through the latest issue of Ghazwa e Hind magazine run by Al Qaeda. It has vowed to demolish the Ram temple and build a mosque in its place.

Not only this, the Ghazwa e Hind magazine spewed venom against Prime Minister Narendra Modi and Uttar Pradesh Chief Minister Yogi Adityanath. Simultaneously, the Islamic terrorists have appealed to Indian Muslims to wage a war against Hindus.

The 110-page editorial published in Ghazwa e Hind is full of typical bigotry. It states: “Hindus are building the Ram temple on the structure of Babri Masjid. We will demolish it and replace it with Babri masjid in the name of Allah.”

The magazine also called Indian governance system a hell of secularism. Further, it urged Indian Muslims to abandon the ideas of co-existence with non-Muslims.

The Al Qaeda magazine called the US government a pro-Modi government, and insisted that all steps would be futile and shameful for Muslims to live under the rule of idol worshippers, unless entire India is under Islamic rule.

It also exhorted the Indian Muslims not to be worried about material loss because they have been suffering the loss of property and lives for decades. Instead, they asked them to use their lives (and properties) for Islamic jihad.

The magazine Ghazwa e Hind also issued threats against Pakistan and Bangladesh governments, and other Islamic nations. It eulogised Tehreek-e-Taliban Pakistan and called for the fall of Shaka. It has also flayed the FIFA World Cup in Qatar, and heaped encomiums on the Taliban regime in Afghanistan.

Ayman al-Zawahari, the current leader of Al Qaeda had initiated the focus on India. He had became the terror outfit’s chief after Osama bin Laden’s death in 2011.

In September 2014, al-Zawahiri announced the establishment of the group’s new branch in the Indian subcontinent in a video posted online.

The founding chief of South Asian wing of Al Qaeda was Sana-ul-Haq, also known as Asim Umar. US forces had killed him in 2019 in the Musa Qala district of Afghanistan in an air strike. He belonged to Sambhal district in Uttar Pradesh.

Al-Zawahiri himself — who had supported pro-hijab protests in Karnataka in a video released in April — was slain on 31 July this year, in a US drone strike at his residence in Kabul.