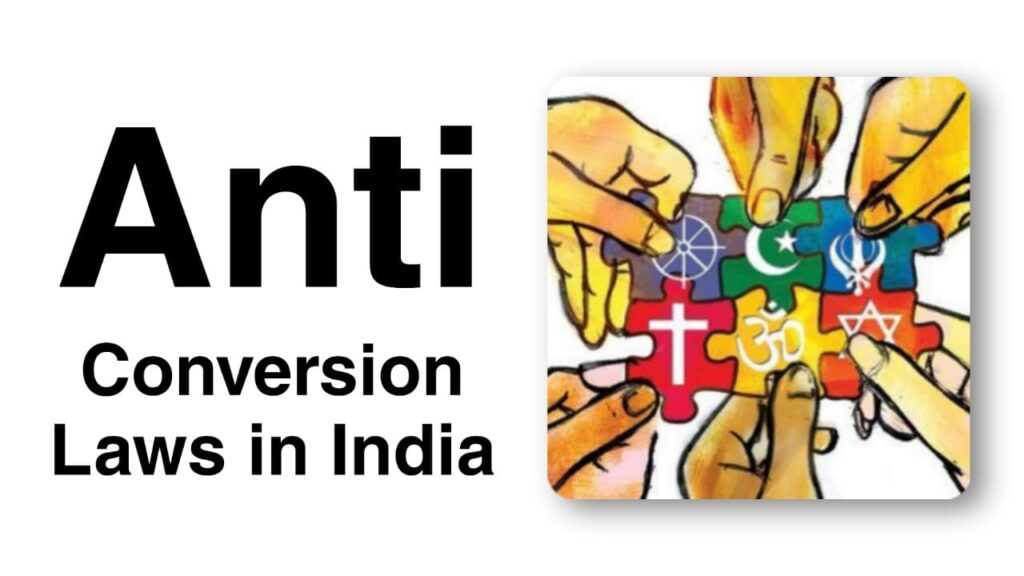 Conversion generates and fosters a rift in the society and leads a stable society into a disintegrated society. It disturbs the social structure and leads to a clash of cultures. Conversions arouse resentment and indignation and help to the flames of communal frenzy and passion creating problems of Law and Order.

When the Britishers ruled India there was no anti-conversion law. The reason being that they were followers of Christianity and understandably they did not enact a law detrimental to their own interest by prohibiting conversion from one religion to another religion. During the British regime many Hindus willingly and voluntarily embraced Christianity to secure pecuniary gains and other advantages from the British rulers.

After India attaining Independence and in the changed democratic set-up, public opinion against conversion became vigilant and assertive. In a predominantly Hindu Society, a large-scale conversion of Hindus to Christianity or Islam has a tendency to disturb the local custom and faith as well as indigenous institutions and thereby rob the local people of their own personality. It generates and fosters a rift in the society and leads a stable society into a disintegrated society. It disturbs the social structure and leads to a clash of cultures. Conversions arouse resentment and indignation and help to the flames of communal frenzy and passion creating problems of Law and Order.

In Madhya Pradesh, having a large population of tribal known as “Adivasis”, the Government received number of reports that large-scale conversions of tribal to Christians are taking place by threat, inducement and other fraudulent means by foreign missionaries and the Government should put an end to this unhealthy practice. The Government then constituted an inquiry commission headed by Dr Bhavani Shankar Niyogi, a retired Judge of the Madhya Pradesh High Court, and comprising five members. One of the members of the Commission was S.K. George, a Christian and a true Gandhian and working as a professor in a college at Wardha. The Commission toured fourteen districts and visited seventy-seven places. It examined 11,300 persons coming from 770 villages and sent questionnaires and received reports from 375 institutions, which included 55 Christian institutions. It also sent questionnaires to prominent individuals of the State. After such detailed and elaborate inquiries the Commission submitted a comprehensive report to the government in 1966. Some of the important recommendations made by the Commission were as follows:-

On these recommendations of the Commission, the Madhya Pradesh Government passed the anti-conversion law known as Madhya Pradesh Swantraya Adhiniyan Act, 1966 prohibiting conversion from one religion to another religion and following Madhya Pradesh Orissa enacted the Act called Orissa freedom of Religion Act 1967. This was soon followed by the Arunachal Pradesh Freedom of Religion Act 1978 to provide for prohibition of conversion from one religious faith to another by use of force or inducement or by fraudulent means. The Union Territory of Tripura also passed a similar enactment. The Parliament as early as 1954 took up for consideration legislative enactment banning conversion known as Indian Conversion (Regulation and Registration Bill and later in 1960 the Backward Communities (Religious Protection) Bill and they had to be dropped for lack of majority support. A Bill was introduced in Parliament by a member O.P. Tyagi called “The Freedom of Religion Bill 1978”. The Bill was a modified and improved version of the legislative enactments of the Madhya Pradesh and Orissa. As there was no sufficient support in Parliament the Bill was withdrawn by the private member O.P. Tyagi.

In the aftermath of Meenakshipuram conversion of Hindus to Islam in Tamil Nadu in February 1981, the Ministry of Home Affairs, Government of India advised the state Governments and Union Territories’ administrations to enact laws prohibiting change of religion on the lines of the existing Acts in Madhya Pradesh Orissa and Arunachal Pradesh. It is significant to note that this suggestion by the Ministry of Home Affairs was made at a time when the ruling party in the Centre was Congress party, which claimed to be secular in outlook and action, and not the Bharatiya Janata Party, willing to wound and yet afraid to strike—maybe an apt characterisation of the half-hearted measures taken by the Central Government for enacting legislation banning conversation from one religion to another religion.

Why the need for anti-conversion law

Formidable forces operating in the field of conversion warrant anti-conversion law. The phenomenal financial wherewithal available for Christian missionaries for proselytization and evangelistic activities to facilitate conversion of people of other religions to Christianity is indeed mind-boggling. Their annual financial budget for proselytization and evangelic activities in foreign countries is 145 billion dollars (Rs. 7,50,000 crore). Looking at the infrastructure facilities they have on role four million full-time workers numbering larger than the combined military strength of United States of America and Europe. This is the largest single army of workers save the red army of China to propagate Christianity. They run 13,000 major libraries. They publish 22,000 periodicals and print four billion tracts every year. They operate 1800 TV and radio stations propagating Christianity. These are the statistical figures published in the year 1989 as evidenced by an article of S. Gurumurthy published in New Indian Express in October 2002.

What about their strength in India? They have more than 1,00,000 Pastors evangelists and preachers. They have set a goal of building 2000 new churches by the year 2000 and to build in Tamil Nadu alone 1000 churches in the far-off villages. These are the plans of just one sect of Christianity. The full-time Indian missionary society of one denomination has increased from 420 in 1973 to 2941 in 1983, an increase of seven times in just 10 years. These are the figures given by Gurumurthi in an article published in October 2002 by New Indian Express. The generals of this army set-up for conversion state: “All over India numerical conversion was on regular increase for nearly 100 years and in the period between 1961 to 1971 there was a decline in conversion. The only major exception is the North-East where the traditional trend is continuing particularly in Arunachal Pradesh.”

Looking at the meticulous planning, preparation, documentation and follow-up action Arun Shourie in his seminal work Missionaries in India states that it is more like pentagon strategy to conquer than a spiritual scheme to serve. The United States Commission on international Religious Freedom is “monitoring very closely” the legislation against religious conversions enacted in Tamil Nadu. This only shows how foreign missionaries are evincing keen interest and their meticulous follow-up action on conversion activities in India. Globally supported and funded Christian missionaries are functioning with unabated zeal and enthusiasm to spread their tentacles to find out victims for conversions to Christianity.

As stated earlier, the annual financial budget for proselytisation and evangelistic activities by foreign countries is of the order Rs. 7,50,000 crore and a substantial portion of this amount finds their entry into India as seen from the following three circumstances. After the Meenakshipuram conversions of Hindus to Islam that took place in February 1981 the Ministry of Home Affairs presented evidence of the extent of foreign support and funding of Christian missionaries for conversion of people to Christianity and advised the state Governments and Union Territory administrations to enact Anti-conversion legislation on the lines of the existing Acts in Madhya Pradesh, Orissa and Arunachal Pradesh. In the Mandaikadu Commission of inquiry there was ample evidence to suggest that foreign money that flows into the country to maintain educational and medical institutions of Christian missionaries is being diverted for the use of professional proselytisers for effecting conversion to Christianity. The commission suggested amendment of the Foreign Contribution (Regulation) Act to plug the loopholes and prevent diversion of funds for proselytisation activities. In this connection, it may be significant to note that also reported that Christian missionaries are getting substantial contribution from foreign countries for their conversion activities.