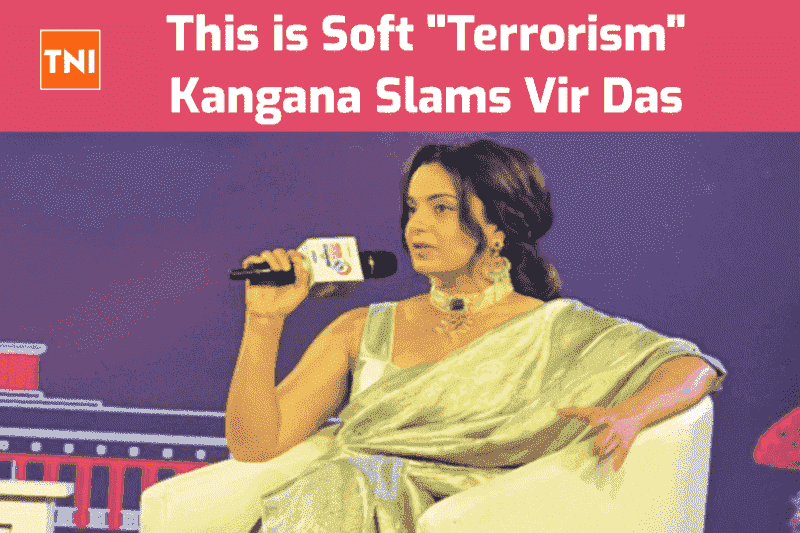 The complainant has alleged that, in this video, Vir Das made derogatory statements against women and India. Das said, “…I come from an India where we worship women in the day and gang rape them at night.”

Another complaint has been filed against him for making “derogatory statements against India” with the Mumbai Police by high court lawyer Ashutosh Dubey Ashutosh is legal advisor of BJP-Maharashtra, Palghar District.

Vir Das is Hinduphobic and a serial offender: Netizens

Twitter users took Vir Das to task. “If you get a chance to speak to a foreign audience in a foreign land about India and Indians, be a #Vivekananda not a #VirDas !,” tweeted Sadhavi Khosla.

“It’s not the first time #VirDas has insulted India & Hindus. Why are these comedians & Bolywood gang after Hindus for worshiping Feminine? Their constant attempt 2 defame Hindus by linking every crime with Sanatan culture is a part of a bigger conspiracy,” posted Pradeep Bhandari, a journalist.

Another Twitter user Rosy shared his old videos on similar lines. In these videos, Vir Das is mocking Hindus. “This Man Vir Das is a SERIAL OFFENDER & Hinduphobe. Here he is In San Francisco Making Fun of Hinduism, Hindus & cracking сгар  jokes on Beef. This is “comedy”?,” she tweeted.

It is soft terrorism: Kangna

Filmmaker Ashoke Pandit, said, “I see a terrorist in this man called #Virdas. He is one of those members of a sleeper cell who has waged a war against our country on a foreign land. Should be immediately arrested under #UAPA and tried under terror laws.”

National awardee actress Kangana Ranaut also slammed him. For this, she shared on her Instagram story, “When you generalise all Indian men as gang-rapists it gives rise and encouragement to racism and bullying against Indians all over the world….after Bengal Famine Churchill famously said,” These Indians breed like rabbits they are bound to die like this …” he blamed Indians sex drive / fertility for the death millions because of hunger…. Such creative work targeting an entire race is soft terrorism… strict actions must be taken against such criminals.”

However, Congress leader Gaurav Pandhi supported Das for his comments. “Just watched @thevirdas’s Kennedy Center video and he should be ashamed of himself for speaking so much of truth in one go and that too on a foreign land,” he posted.

A clarification or shamelessness?

Following a bakclash, the comedian issued a long statment on Twitter, “There has been a sizeable reaction to a video I posted on YouTube. The video is a satire about the duality of two very separate India’s that do different things. Like any nation has light and dark, good and evil within it. None of this is a secret.

The video appeals for us to never forget that we are great. To never stop focusing on what makes us great. It ends in a gigantic patriotic round of applause for a country we all love, believe in, and are proud of. That there is more to our country than the headlines, a deep beauty. THAT’S the point of the video and the reason for the applause.

Please do not be fooled by edited snippets. People cheer for India with hope, not hate. People clap for India with respect, not malice. You cannot sell tickets, earn applause, or represent a great people with negativity, only with pride.

I take pride in my country, and I carry that pride across the world. To me, a room full of people anywhere in the world, giving India an ovation is pure love. I ask of you, the same thing I asked of that audience…to focus on the light, remember our greatness, and spread the love.”