Rahul had alleged that Modi government policies had brought China and Pakistan closer. The historically wrong statement has not gone down well, within India and abroad. 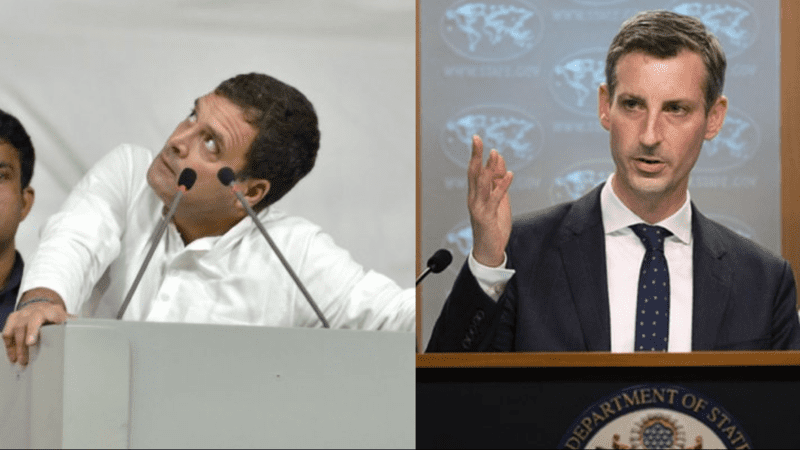 Rahul Gandhi’s criticism of Modi government regarding its foreign policy has not gone down well. U.S. state department spokesman has stated that he “won’t endorse those remarks”.

Rahul had made the controversial remarks on February 2. He was participating in the debate on motion of thanks on the President’s address. During his speech, Rahul said that China and Pakistan had come closer due to ineffective policies of Government of India.

China has a plan. The Chinese have a very clear vision of what they want to do. The single biggest strategic goal of India’s foreign policy has been to keep Pakistan and China separate. What you (Centre) have done is, you have brought them together.

You have taken the concept of two different fronts and converted into a unified front. And, by the way, if you haven’t realised it, in case you have not understood what is going on, it is very clear that the Chinese and the Pakistanis are planning. Look at the weapons that they are buying… I am clearly stating in the House of Parliament, that we have made a massive blunder.

When asked by media to comment on this remark, the reply of U.S. state department spokesperson, Ned Price was terse. He said, “I will leave it to Pakistanis and PRC (Peoples Republic of China) to speak on their relationship. I certainly won’t endorse those remarks.

The response from U.S. is seen as an embarrassment to Rahul Gandhi’s remarks. Moreover, his remarks are also not supported by history. Therefore, it is not surprising that the External Affairs Minister has rebuked Rahul. The Minister, S Jaishankar reminded him of the long history of Sino-Pak relations.

S Jaishankar stated that it was in 1963 when Pakistan handed over Shaksgam valley to China and permitted China to build the Karakoram Highway through POJK.

In his follow up tweet, S Jaishankar reminded Rahul that it was during Congress regime in 2013 that the notorious CPEC (China Pakistan Economic Corridor) was started.

Hopefully Rahul Gandhi will learn some history from this incident. It will be in better interest of India because we need a strong and intelligent opposition.