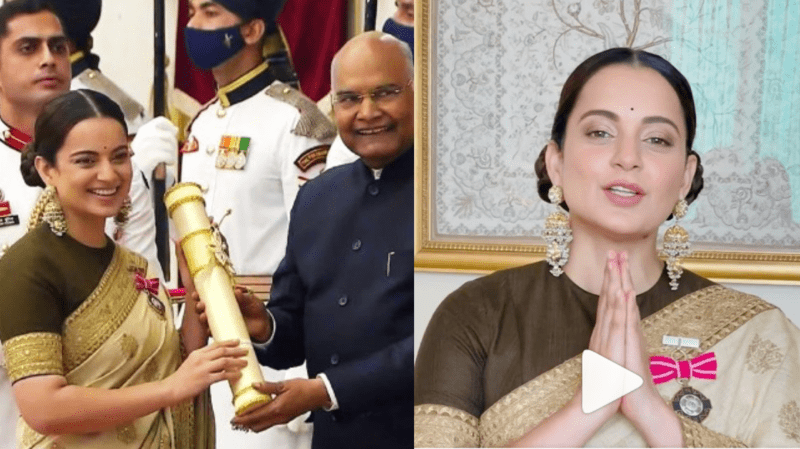 Many may not know that the recent Padma Award to national awardee Kangana Ranaut is not for her performance in films, but for being an ideal citizen, who called out “jihadis or khalistanis or enemy country.”
Having got the award, the ‘Dhakad’ actor shared her video on Instagram.
“As an artist, I have received several awards, honours, love and acknowledgments. But for the first time, I have been awarded by the government of India for being its ideal citizen, and I’m greatful for that.”
In this short video, she recalled,

“I started my career at a young age and got success only after 8-10 years. But instead of enjoying that success, I started working on certain things like refusing to endorse fairness products, to do item numbers, to work in films by big production houses with big male actors. I ended up making more enemies than money.”

It is nation first for Kangana

The Bollywood actress also spoke about how she took on those breaking the country.

“I also raised my voice against those breaking the country whether they are jihadis or khalistanis or enemy country. And I do not even know how many cases are there against me? And often people ask me what do you get by doing all this and it is not your job. So, this award is my answer to them. The honour I got in the form of Padma Shri will shut mouths of many people. I thank the nation from my heart. Jai Hind!,” she concluded.

Kangana has been in the news in the past for various reasons. For taking on “fake” farmers protesting against farm laws. Also calling out those who damaged public property and were indulging in arson during the anti-CAA protests in Delhi.

While, most of the Bollywood remained mum when attempts were being made to break the country, Kangana took a stand. She did not worry about unfair criticism or cases filed against her.

Meanwhile, during an interview to a TV channel yesterday, she opened up about marriage and children. She said that everyone will get to know soon when asked about her partner.