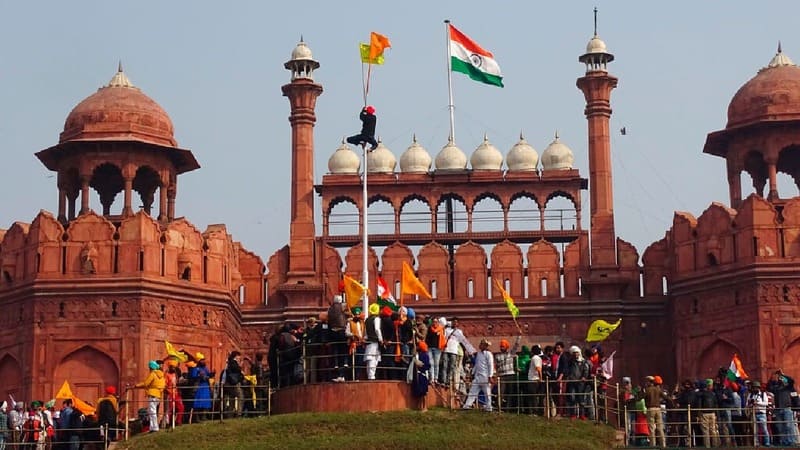 Despite the Supreme Court saying that farmers have a right to protest but roads should not be blocked indefinitely, farm union leader Rakesh Tikait is in no mood relent. SC had made these observations to ease the problems faced by citizens of national capital. Apparently, Tikait is instigating protesters and threatening against government’s attempt to move them from the protest sites.

“If there is an attempt to forcibly remove the farmers from the borders, then they will make government offices across the country into Galla Mandi,” Tikait posted on Twitter.
Farm protesters have pitched tents at five sites near Delhi’s borders — Singhu, Ghaziabad, Tikri, Dhansa and Shahjahanpur (on the Rajasthan-Haryana border) since November last year.
They have been protesting from these places against three farm laws. Highways and roads have been jammed since then. The indefinite protest is testing the patience of general population of the capital. Local people have to travel 1-2 hours extra on daily basis due to the blockades.
Following October 21 apex court’s observation based on a plea against the blockade of roads between Delhi and Noida due to farmers’ protests against the three agriculture laws, the Delhi Police on Oct 29 started removing barricades and concrete barriers put up by farmers at the Gazipur and Tikri protest sites. Cops are trying to clear the road stretch blocked for nearly a year. It has come as a big relief to the daily commuters and general public, as the approach to their homes had literally been choked for about eleven months.
But, with Tikait digging in his heels, there could again be confrontation between the police and protesters. It may also stall the further process of clearing the roads, which has turned lives of general public into a nightmare.

If the latest tweet from Rakesh Tikait is any indication then the nightmare for Delhi citizens and those who have to travel to the national capital is far from over.

His latest tweet says, “The central government has time till November 26. From November 27 onwards, farmers will start from their villages towards Delhi borders from all directions. They will reach the protest sites around Delhi on tractors to lay siege of the protest sites to fortify it and strengthen the protest.
General public and administration feel that such statements could give rise to unruly and violent incidents like the ugly incident that took place at Red Fort or the violence and hooliganism by Nihangs at farmers’ protest sites where a Dalit was lynched to death and his hand was chopped off by ‘protesters’.
There has been various law and order, and other serious crime issues at these sites, rue local residents, who fear speaking against the mob.