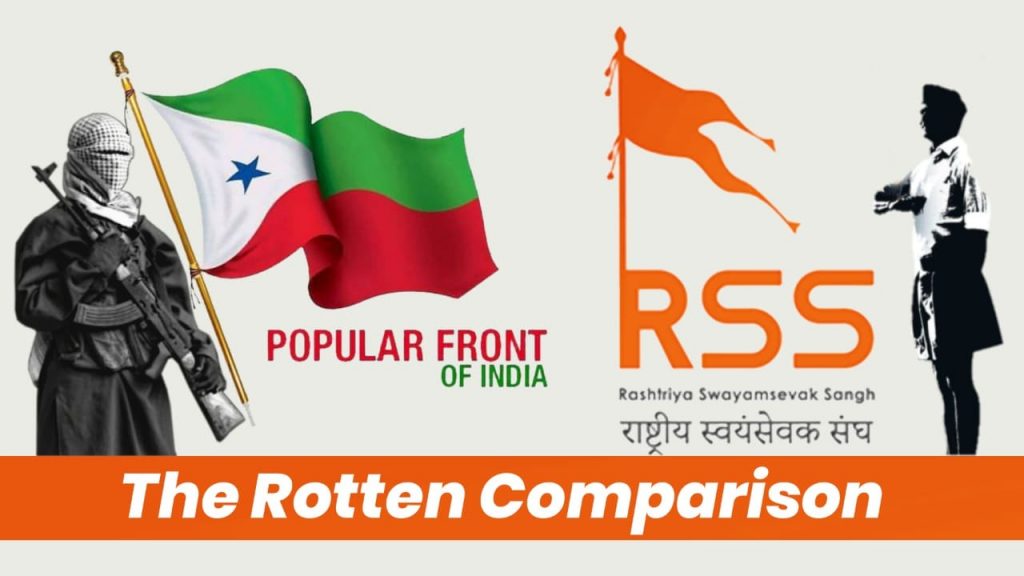 After the Narendra Modi government banned PFI, there is a growing clamour for banning RSS as some political leaders and parties of the country are equating the two outfits.

Is this demand sensible? Is there a common denominator between the two organisations?

PFI is a terror organisation that believes in the supremacy of Islam and dreams of turning India into an Islamic state where non-Muslims are vanquished unless they pay Jazia. It also plans to establish the rule of Islam in India by 2047 and runs arms training camps under the guise of martial arts training, as per Bihar police who recovered PFI documents.

It wants to impose a Taliban brand of Islam in India and keep a special attack force to fulfil its objectives, which was revealed by NIA in 2018 with documentary evidence.

PFI aims to spread social unrest with women at the forefront of the protests. This was evident in the hijab row that erupted in Karnataka.

PFI tries to import the Palestinian intifada into India, a testimony to it is the chopping of hands of a Christian teacher and severing of heads in Rajasthan and other places. Also resorting to stone-pelting during anti-CAA protests.

PFI’s map bears a striking resemblance to the map of Palestine and to that of the Jammu and Kashmir Liberation Front (JKLF).

PFI hates Indian values and seeks to bring an Islamic revolution in the country. In fact, it labours hard to superimpose the Arab culture on our soil. Therefore, PFI is an enemy of everything that is Indian.

Does it believe in the supremacy of Hinduism? If it believed in it, there could not have been a dedicated Muslim wing called the Muslim Rashtriya Manch. It also is committed to preserve indigenous faiths across India which was seen with Mohan Bhagwat’s recent visit to Meghalaya where he interacted with people of the indigenous Seng Khasi faith.

Is RSS manufacturing terrorists? Is it exporting Indians to fight on behalf of global terror networks that thrive on the blood of other religious communities? No, it is a socio-cultural organisation whose core philosophy is patriotism and service to the nation. It has produced great Indian leaders like PM Modi, who is revered as a global leader.

Is RSS involved in assassination plots, hate-crimes, murders and racketeering? Nothing has been proved in the court of law even during 60-plus years of Congress rule. It works towards social emancipation, strives hard to render their services during calamities, without considering the religion of the affected people.

RSS also works to uplift women, the triple talaq ban is the biggest testimony by the central government headed by Modi, who is a RSS man.

Finally, the RSS is proud of the Indian culture which PFI abhors.

Thus, RSS and PFI are poles apart, and leaders like Lalu Prasad Yadav should not showcase themselves as fools who cannot distinguish between apples and rotten eggs in a basket?