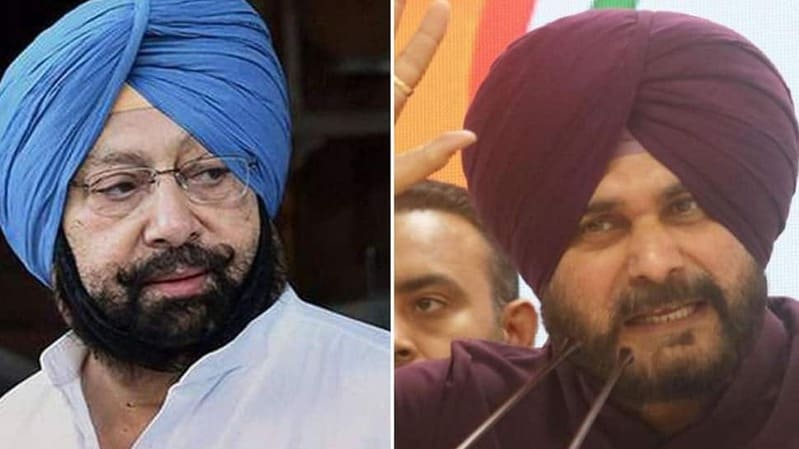 Captain Amarinder Singh today set stage for a showdown with Punjab Congress President Navjot Singh Sidhu as he announced forming a political party for the Punjab Legislative Assembly Elections schedule to be held early next year.

Addressing a press conference today, Captain Amarinder Singh said, “Many Congress leaders would join him once he forms the party”.  He claimed many senior Congress leaders are in touch with him.
Ex-Congress CM said from where ever Sidhu will contest his party nominee will fight against him. Captain, however, did not reveal the name of his party.  He said the Election Commission of India is yet to give its nod on the same. He said his conference was only for presenting his four and a half year report caed as the CM.

Claiming the Congress is nowhere in the picture in Punjab, he said the fight would be with the Shiromani Akali Dal (SAD). Captain claimed ever since Sidhu joined the Congress, the party’s popularity graph of the Congress had dropped by 25 per cent.

The former CM hit out at his detractors, particularly Navjot Sidhu and Deputy CM Sukhjinder Singh Randhawa for indulging in petty issues. “We will fight and defeat Sidhu from wherever he contests the upcoming Assembly polls,” he said.

He trashed the allegations of not delivering during the 4.5 years of his rule. “CHARANJIT CHANNI government was merely implementing what his cabinet had decided to do. “All the work we started is simply being carried forward by Channi”.

The former CM rejected congress claims of a majority of the MLAs opposing his continuation in office. He said, “once they (party leadership) had made up their mind to replace me, all these excuses were made.”

On security of the state, Captain slamed congress government for its repeated denial of any serious security concerns in the border state. Says there was something very wrong and dangerous happening at the borders, which the state could ill-afford to ignore.

He trashed allegations of BSF taking over state’s administration or being deployed in Golden Temple etc, Says such misconceptions being spread to score brownie points ahead of assembly elections. @BSF_India here only for helping maintain national security.

Sidhu also attacked the Captain on his Twitter. “You wanted to close doors on me, as I was raising voice of the People, speaking truth to power. Last time you formed your own party, you lost your ballot, garnering only 856 votes … People of Punjab are again waiting to punish you for compromising on the interests of Punjab !!”

He went on to call the two-time CM, “Jaichand of Punjab” . “There is no suffering that pity will not insult ! Were you unceremoniously dumped for good governance ? & 18 Point Agenda shoved down the throat of poorest performing CM of Punjab … You will be remembered as Jaichand of Punjab’s Political history, you are truly a spent cartridge,” said Sidhu.

It seems Navjot Sidhu is also ignorant regarding history, hence the “Jaichand” jibe. Contrary to general perception, Jaichand, the medieval ruler of Kannauj in today’s Uttar Pradesh was not a traitor. He was a valiant fighter but was defeated by Islamist invader Muhammad Ghuri.

“Was it Pity, that a 3 Member Committee was formed to make you accountable? Why were MLAs against you? Because everyone knew you have colluded with Badals ! All you want is to defeat me, have you ever wanted Punjab to win? Your 75/25 dealings with Badals and BJP are crystal clear,”he added.

Captain replied him through Twitter, “This man knows nothing. He just keeps shooting nonsense from his mouth. I’d been meeting all central ministers to discuss state issues. States can’t function unless they work with Centre. But I don’t expect @sherryontopp to know anything about good governance.” This reply was tweeted by Raveen Thukral, the media adviser of Captain Amarinder Singh.

With elections round the corner, the word of wars will be hotting up further.