Thirty years ago, thousands of Hindus had assembled at Ayodhya to undo a historical wrong. On December 6, 1992, they demolished a structure that was disputed to be Babri Masjid. 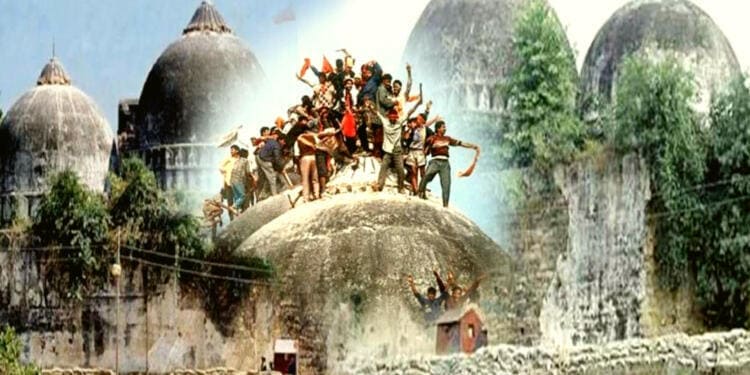 December 6 has a special significance in the history of modern India. Or should we say Bhãrat! A large section of Hindus celebrate it as Shaurya Diwas. Shaurya does not have an exact translation in English, the closest translation is ‘valour’. On this day, in 1992, thousands of highly motivated Hindus demolished the disputed structure at Ayodhya.

The demolished structure had different names. One section called it ‘Vivãdit Dhancha’ while another called it ‘Babri Masjid’. Former means ‘disputed structure’ while the latter means ‘Babri Mosque’. Technically, the former term is more appropriate.

India has been a battlefield for more than twelve centuries. Since, eighth century, we have been facing Islamic aggression and Christian aggression since fifteenth century. After such a protracted battle, we could salvage a divided India. Islam has extracted its pound of flesh in the form of two blots – Pakistan and Bangladesh.

When a country breaks the shackles of invaders, first step is to erase the ugly marks of colonisation by aggressors. Nations all over the world do it. They bring down statues of tyrants and remove their names from places of eminence. Let us look at Shaurya Diwas in this context

Unfortunately, we did nothing of the sort since 1947. All the blots were there to see. Especially, the symbols of atrocities perpetrated by Islamic rulers. From its inception, Islam has thrived by demolishing or usurping the holy places of others. It started from Kaba itself.

The disputed structure at Ayodhya was a gruesome reminder of that ugly chapter in Bhãrat’s history. It stood there like an eye-sore. So are thousands of other such Islamic buildings.

Thirty years ago, when dozens of Hindu youth climbed atop the structure, it was an act of Shaurya. Of courage and valour. Because, hundreds of Rãm Bhakts had paid with their lives. The Union Government was against any such act. It was against a constitution which prevented Hindus from undoing the atrocities of past. Acting against such odd needs lots of courage.

In a way, the Hindus who demolished the structure did what our ancestors had been doing for centuries. They looked the formidable bullies in their eyes and did what they considered righteous, Constitution not withstanding.

Had they not demolished the structure, would a court have dared to pronounce a judgement in favour of Hindus? Highly unlikely.

Can a Masjid be holy or Shaheed?

In Islamic theology, a Mosque or a Masjid is a place to congregate. It has not sanctity attached to it. It is unlike Hindu Dharm. In Hindu Dharm, when an idol is placed, it is done by an elaborate ritual called ‘Prãn Pratishtha’. That is, now the deity or God resides in the idol. Hence, the idol, is sacred. Same goes for the entire temple. It is abode of the deity, therefore, it is sacred.

In short, shifting a mosque is a routine and mundane procedure. It is done in Islamic country, day in and day out. Even for widening of roads. So, the Muslim clergy could have easily handed over the sight to Hindus. It would have been a goodwill gesture. But then, Islam thrives on insulting non-Muslims. Therefore, Islamists, backed up by leftist historians created a confrontation. It could easily have been avoided.

They are still not learning. Mr. Owaisi frequently raises the Issue of Rãm temple to incite Muslims. The phrase that he uses is that Babri Masjid is ‘Shaheed’.

This term is ironic. As per Islamic terminology Shaheed means ‘witness to monotheism of Islam’. Now, can a building, made up of bricks and stones be a witness? Is it not idolatry that Islamists abhor? Yet, emotions are aroused to fulfil political objectives.