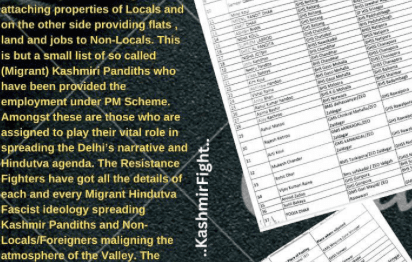 A few days after an Israeli filmmaker Nadav Lapid labelled “The Kashmir Files” a propaganda movie, a group associated with the terrorist outfit Lashkar-e-Toiba has released a list of 56 Pandits with their names and details while vowing to attack them.

TKF is based on the trauma of Kashmiri Hindus. Islamic terrorists unleashed a reign of terror on them. Kashmiri Pandits were terrorised, beaten, killed, robbed, raped and forced to flee by Islamic terrorists from Kashmir. The present government asked some of them to return to Kashmir valley. The list released by terror outfit called ‘The Resistance Force’ has threatened to kill these employees.

These Pandits/Hindus are working in the valley and have been appointed under the special PM employment package here. The list has been released on a blog “Kashmir Fight.”

Following a number of targeted murders over the last one year, most of the Hindu employees have already fled the Valley. Many of them have been holding protests in Jammu for more than 200 days.

They have been demanding their relocation till the situation improves in Kashmir, but so far their pleas have gone unheard. Kashmiri Pandits lamented that the list is an open threat to them and all those working there are living in a fear.

On the other hand, the BJP has urged the police to find out who had leaked the names of Hindu employees. They have asked the police to ensure the safety of Hindus in Kashmir.

Meanwhile, Vivek Agnihotri who made “The Kashmir Files” film, tweeted, “In less than a week, after Islamist terrorists were given ideological support openly from GOI’s platform #IFFI2022, The Resistance Front (a front of LeT) has issued a list of Kashmiri Hindus to be targeted by its terrorists. ..If any Hindu is targeted in Kashmir after this, you know who has the blood on his/her hand…The common narrative between Lapid’s remarks and The Resistance Front’s threat is this: FASCIST HINDUS.”