Annamalai claims that ADGP (intelligence) is misusing his official status to promote Christianity. He is in touch with Christian Missionaries and favouring posting to Christian officials. 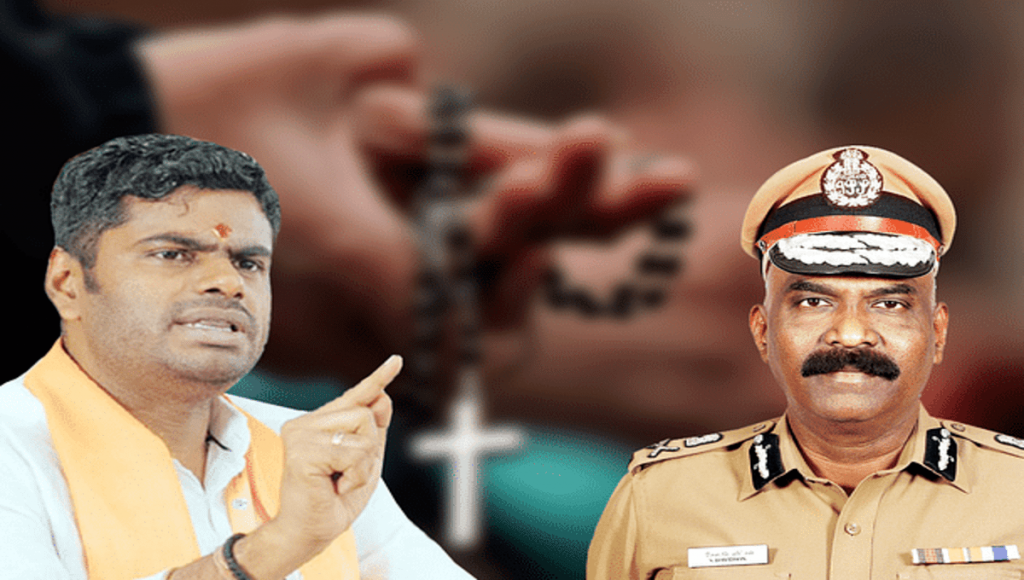 Tamil Nadu BJP President K. Annamalai has alleged that Additional Director General of Police (Intelligence) Davidson Devasirvatham has links with Christian Missionary groups. According to him the police official is promoting Christianity/missionary activity in the state.

Annamalai has levelled these allegations in an interview to senior journalist Rangaraj Pandey. He added that Davidson Devasirvatham has close links with Christian Missionary groups. And that Davidson is working with an agenda of promoting a particular religion in the southern part of the state.

Ever since it came to power, the DMK government is working on an agenda. It is filling the posts of Deputy Superintendent of Police and above ranks from a particular community.

The chief of the intelligence department, ADGP, who goes by the name you mentioned.. he has got a single point agenda to promote something in south Tamil Nadu. He clearly has links with missionary groups. And, he wants such officers in sensitive posts and is handpicking them. He is placing them on powerful posts. Be it the Thanjavur Lavanya suicide, or the incident exposed by CNN News 18 where Bible was distributed to children in schools, the Tamil Nadu [police] intelligence department is running all these operations. I am making an open observation. Let them deny it.

When asked if such statements won’t cause divisive mindset among the police force, he said that no Christian will take it wrongly when missionary activities are called out.

“If someone sitting in power works for promoting one’s own religion keeping that as the single point agenda, and is adamant about it, then it is problematic and I am going to call them out openly. I have no fear”, the BJP Tamil Nadu chief said.

He also cited the ‘Fake Passport Scam’ in which over 200 passports are believed to have been issued from Madurai to ineligible persons during Davidson Devasirvatham’s stint as the city’s Police Commissioner.

Interestingly, the Madras High Court had complimented Annamalai for bringing the fake passport scam to light. Annamalai had accused Davidson Devasirvatham of destroying evidence when he was the Madurai Police Commissioner. But, the HC gave clean chit to Davidson in the case.

“The High Court may have given the judgement but he cannot escape for a long time. Out of the passports issued, what is the percentage of Christian applicants? You should do a special story. If you want, I will give you the data. Is it not more than 74%?”, he said.

He also called the recent Coimbatore Blasts as a failure of state intelligence and accused the DMK government of indulging in minority appeasement politics by not calling it a terror attack despite prima facie evidence pointing towards the same.