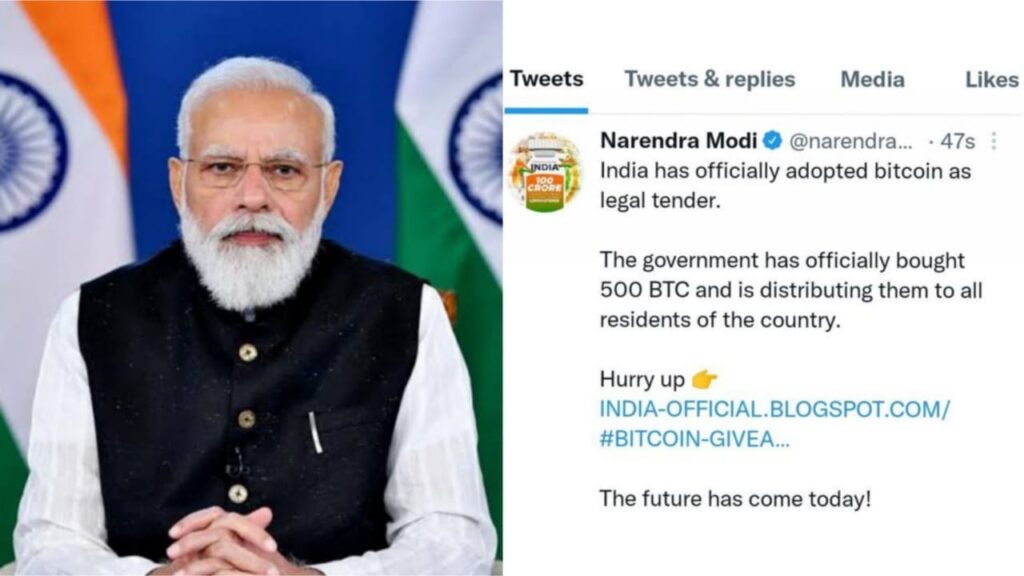 The Prime Minister’s Office (PMO) said on Sunday that Prime Minister Narendra Modi’s Twitter account was “very briefly compromised” and was subsequently secured when the problem was reported to the micro-blogging site.

During the time when the account was compromised, a fraudulent tweet was made claiming that India has officially adopted Bitcoin as legal tender and the country has purchased the digital currency to distribute to residents. The tweet claimed that the Indian government has purchased 500 BTC for INR 184,74,53,997 and is distributing them around the country. The tweet was deleted a few minutes after it was posted.

The account has been restored, and the fraudulent tweets have been removed. PM Modi has a total of 73.4 million Twitter followers. After PM Modi’s account was compromised, #Hacked began trending in India.

People were talking about PM Modi’s Twitter account being “hacked,” but how exactly does this hacking happen?

PM Narendra Modi’s website narendramodi.in uses the Twitter API to read and write Twitter data. API stands for Application Programming Interface. This software provides “middleman services” between two applications that want to communicate with each other.

So due to weak API security implementation, the threat actors were able to get access to Twitter API.

After gaining access to API, hackers were able to perform user activities, such as sending messages and media without requiring login credentials.

Cyber Security Expert Sunny Nehra explained the same and tweeted API Security is something that needs to be taken seriously.

So Actually, Twitter login credentials were not compromised, but the website’s Twitter API was accessed, due to which hackers were able to make tweets through PM’s Twitter handle.