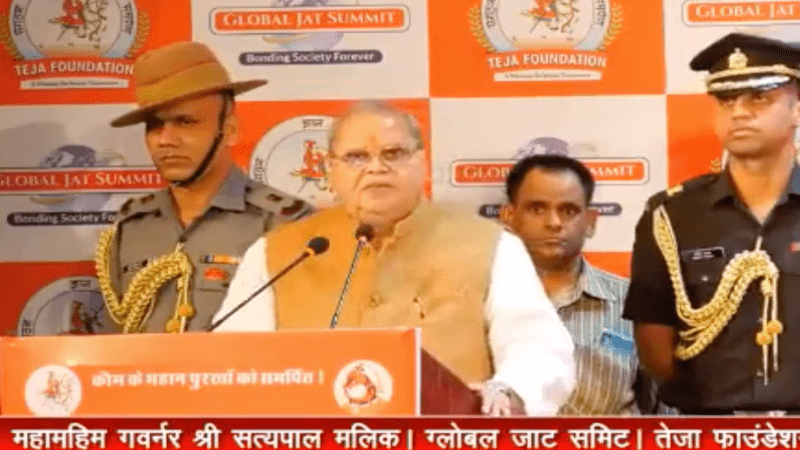 Chorus is growing for removal of Meghalaya Governor Satyapal Malik. The reason is a viral video of his veiled threats to the Modi government. In this video, he appears to be talking of ‘Indira Gandhi-like assassination attempts’ for not revoking farm laws. This video is going viral on social media platforms. Malik had addressed a gathering on November 8.

“..do not use force against them (Sikhs)…do not send them home empty-handed. Because they (Sikhs) do not forget easily, not even after 300 years,” he is heard saying in the video while addressing a gathering.

There appears to be an element of glorification of Khalistanis by Malik. He said, “Indira Gandhi knew that she would be killed and she was killed. They killed General Vaidya in Pune and General Dwyer in London. I have even said that don’t test the patience of the Sikh community.”

In a warning tone, the Governor further said that the incumbent government should roll back the farm laws. Otherwise, the government might have to face similar consequences. “Anything can happen. Today, you are in power. You don’t know what can be the consequences,” Malik added.

His address sounded more like that of a politician addressing a rally during elections. People don’t expect a person on a constitutional post to show such behaviour. This impropriety on part of Satyapal Malik has not gone down well with people. As a result, #sacksatyapalmalik was trending on Twitter by outraged netizens seeking his removal.

JNU professor, Anand Ranganathan tweeted, “This language, its delivery, I’m afraid, is totally unacceptable, more so because this man holds a high constitutional post. He is clearly threatening Modi here besides admiring retributive violence. I am stunned that a Governor can be so crass & boorish,”

One twitter user Pallav Bihani tweeted, “Appreciating Terrorists, Murders of Indra Gandhi, khalistani Supports, Comparing Terrorists with our Real Heroes.”
“No comparison between freedom fighters & terrorist s are acceptable,” added Arun. Ashoke Pandit, said, “He is a terrorist supporter and indirectly supports the assassination  of #IndiraGandhi & #GenVaidya.”
KK Paliwal, said, “The way Satya Pal Malik glorified the assassination of the Prime Minister, in spite of holding a dignified and prestigious post like Governor, incited the Sikhs & Jats to terrorism, We all should say:  #SackSatyapalMalik.”

“If any Government people are watching kindly remove this person as he is not fit to be at this post ..It’s a utter disgrace to the nation with this type of people with break india mentality….,” added another user.