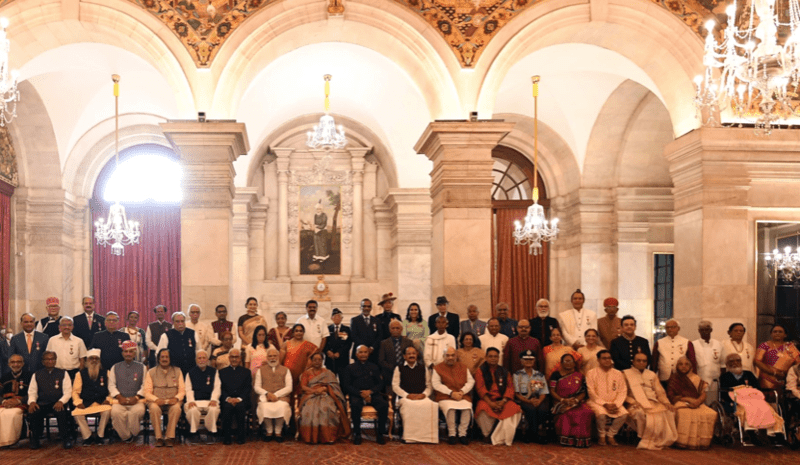 Other than popular sportspersons and film stars, little known people from small backgrounds have received Padma Awards. They are persons who made big differences in the lives of others.

A total of 119 recipients were conferred the Padma Awards. The highest civilian honours in India were presented by President Ram Nath Kovind on Monday.

Among the motivating stories one is of 66-year-old Harekala Hajabba. He is an orange vendor from Karnataka’s Mangaluru. He received Padma Shri Award, India’s second-highest civilian award. He is credited with bringing a revolution in rural education by constructing a school in Harekala-Newpadpu village in Mangaluru. About 175 underprivileged students from the village are studying in this school at present.

He has been selling oranges at a bus depot since 1977. The idea of building a school came to his mind after an embarrassing incident. A foreigner asked him the rates of oranges, he was selling. Harkela, who is illiterate and only speaks Kannada, could not answer him and felt bad.

The incident inspired him to build a school. And two decades later, he could realise his dream. The inspiring tale earned him an award from the President of the country.

Tulasi: The encyclopaedia of Forest

Tulasi Gowda is also known as the “Encyclopedia of Forest”. She caught eyeballs in the Rshtrapati Bhavan as she walked barefoot in the historic Durbar Hall. She recieved the Padma Shri award, India’s fourth-highest civilian honour, from the President.

Tulasi was born into a Halakki tribal family in a Karnataka village of Uttara Kannada district. She has planted over 30,000 saplings in her lifetime.

The awardees, include 7 Padma Vibhushan, 10 Padma Bhushan and 102 Padma Shri Awards. 29 of the awardees are women, 16 Posthumous awardees and 1 transgender awardee.

“From the environment to enterprise, agriculture to the arts, science to social service, public administration to cinema…recipients of the #PeoplesPadma come from diverse backgrounds. I would urge you all to know about each of the awardees and get inspired,” Tweeted Prime Minister Narendra Modi.

“Attended the first of the Padma Award ceremonies for the years 2020 and 2021. I felt extremely happy to see grassroots level achievers being recognised for their exemplary efforts to further public good. Congratulations to all those who have been conferred the #PeoplesPadma,” he said in another Tweet.