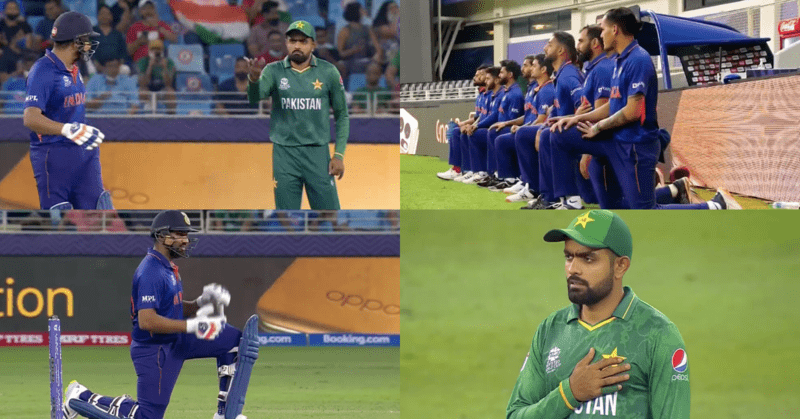 Certainly, for the Pakistan team and its former senior players it is not a win of Pakistan over India but of Muslims over Hindus or ‘Islam’ over ‘kufr’.
Displaying his communal and bigoted mentality, latest one to join the competition is former Pakistan speedster Waqar Younis who praised opener Mohammad Rizwan for doing Namaz in front of “Hindus”.
In a sports TV show, he said-

“What I liked the most was what Rizwan did. ‘Usne Hinduon ke beech mein khade ho ke Namaz padhi (He stood in the middle of the ground and offered prayer in front of Hindus). That was something very very special for me.”

He was slammed by saner voices for his communal comments. Ex-India pacer Venkatesh Prasad, Tweeted, “Takes jihadi mindset of another level to say this in a sport. What a shameless man.”

After seeing backlash to his comments, Younis later apologised. The apology reeks of insincerity.

A “liberal” may overlook his statement as one off comment but, the truth is otherwise. In what shows the mindset of the team and the nation as a whole is that none other than Pakistan’s current Captain was heard saying “kufr toot gaya” in a video soon after Pakistan beat India for the first time in a world cup game.

Pakistani commentator Bazir Khan, while interviewing winning captain Babar Azam, in a post-match presentation ceremony had said, “Lekin Kufr to toot gaya,” to which Azam replied, “All because of Allah.”

Interstingly, Azam was seen on the ground doing Namaz several times during the match although any display of religious or political activities on the ground is not considered appropriate.

Pak’s Interior Minister Sheikh Rasheed also shared such sentiments after the win. He tried to become the marketeer of Islam for the entire world.

Calling it a ‘victory for Islam’. Rasheed was heard in the video, saying, “the sentiments of Muslims from around the world, including in India, were with the Pakistani cricket team during the match. For Pakistan, today’s India-Pakistan match was the final.”

Contrary to Pak players’ mindset, Indian Captain Virat Kohli showed usual sportsmanship on the field. After losing the match, a smiling Kohli was seen patting and hugging the two Pak openers as a goodwill gesture.