Mohan Bhagwat, RSS chief has once again said that Muslims have nothing to fear from Hindus, but they must shun their supremacist attitude. 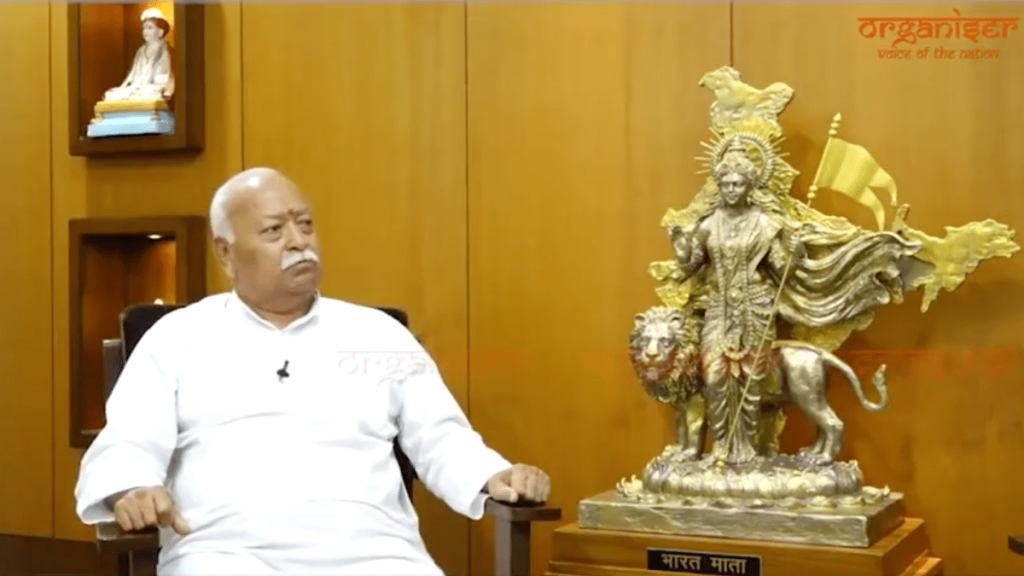 Nagpur (Maharashtra): RSS Chief Mohan Bhagwat has said Muslims have nothing to fear in India, but they must abandon their supremacist attitude. In an interview to Organiser and Panchjanya magazines, Bhagwat said Islam has nothing to fear because Muslims in Bharat can stick to their faith and there is no stubbornness among Hindus that they should return to the faith of their ancestors.

“The simple truth is this – Hindusthan should remain Hindusthan. There is no harm to Muslims living today in Bharat. If they wish to stick to their faith, they can. If they want to return to the faith of their ancestors, they may. It is entirely their choice. There is no such stubbornness among Hindus. Islam has nothing to fear,” Mohan Bhagwat said.

Bhagwat also went on to add that Muslims must abandon their rhetoric of supremacy. “We (Muslims) are of an exalted race; we once ruled over this land, and shall rule it again; only our path is right, rest everyone is wrong; we are different, therefore we will continue to be so; we cannot live together – they must abandon this narrative,” Mohan Bhagwat added.

Mohan Bhagwat also said the new-found aggression among Hindus in Bharat and elsewhere is due to the Hindu society having been at war for over 1,000 years and finally awakened with the Sangh’s support. One reason for this aggression is the supremacist attitude of Muslims.

“You see, Hindu society has been at war for over 1,000 years – this fight has been going on against foreign aggressions, foreign influences and foreign conspiracies. Sangh has offered its support to this cause, as have others. There are many who have spoken about it. And it is because of all these that the Hindu society has awakened. It is but natural for those at war to be aggressive,” he said.

Mohan Bhagwat said Hindu society is in the midst of yet another war and since this is a war, people are likely to get overzealous and provocative statements will be uttered.

“This war is not against an enemy outside, but against an enemy within. So there is a war to defend Hindu Society, Hindu Dharma and Hindu Culture. Foreign invaders are no longer there, but foreign influences and foreign conspiracies have continued. Since this is a war, people are likely to get overzealous. Although this is not desirable, provocative statements will be uttered,” said Mohan Bhagwat.