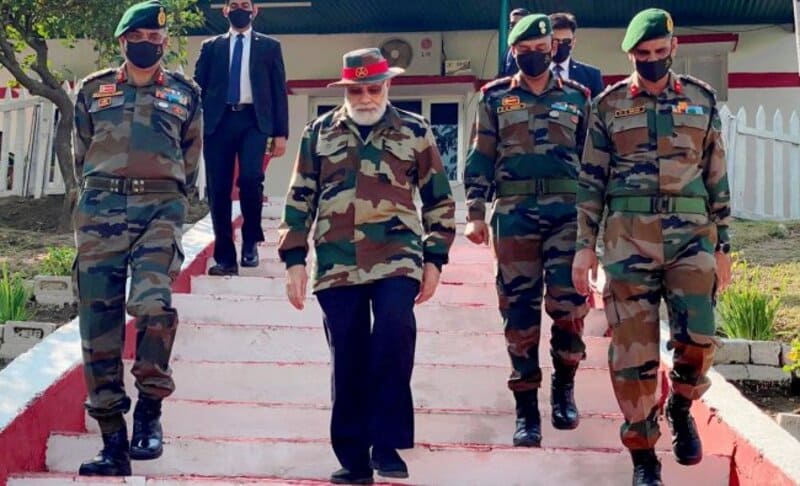 Prime Minister Narendra Modi, who considers soldiers as his family and celebrates his Diwali with them. He has made it a tradition for himself. Today he reached the Nowshera sector of Jammu & Kashmir to celebrate Diwali festival with the soldiers.

“I want to spend Diwali with family members, so I join you on this festival,” Modi said in his address to troops in the Nowshera Sector.

In his address, Modi praised the role played by the troops at Nowshera in surgical strikes. He said several attempts were made to spread terrorism in the region after the surgical strike. But the disruptive forces were given a befitting reply.

The surgical strike was conducted on September 29, 2016, across the Line of Control (LoC) in response to a terrorist attack on an Army base in the Uri sector here.

Praising the soldiers in Nowshera, he said the Indian soldiers are the “Suraksha kawach” of “Maa Bharti”.

“It is because of you all that people of our country can sleep peacefully and there is happiness during festivals,” Modi added.

Praises Made in India defence equipments

During his address, Narendra Modi also touched upon indigenisation of defence requirements. He mentioned that manufacturing of defence equipments and weapons in India has increased manifold. This change came after the BJP government came to power at the centre.

“It used to take years together to procure defence equipment for the security forces. But now India is focused on developing indigenous defence capabilities. About 65% of the defence budget is being spent to procure arms and ammunition from within the country. Earlier the forces were heavily dependent on imports. India is itself developing Arjun Tanks, fighter jets like Tejas at home now,” – Narendra Modi

“On the occasion of Vijayadashami, seven new defence companies carved out of the Ordnance Factory Board were also dedicated to the nation,” he further said. Modi said that his goverment is focused on developing indigenous defence technology.

“The role of women in the area of security of the nation is touching newer heights. Women are now being given permanent commission in the army. The doors of premier military institutions have also been opened for women,” he said.

“For your sacrifices, your gallantry, each Indian will light at least one diya for you today on the occasion of Diwali,” Modi added.

Earlier, having reached here, he first met top Army officials and paid his tributes to soldiers who sacrificied their lives in the line of duty, at Nowshera in Jammu and Kashmir.

Wearing Army uniform, he addressed the troops and later met the soldiers. He exchanged sweets with them to celebrate Diwali of year 2021. The PM also spoke with veterans as well at Nowshera.

Modi has been celebrating Diwali with the soliders in different parts of India.

Even during Corona virus pandemic, the Prime Minister had reached Longewala, Jaisalmer, Rajasthan to spend time with soldiers on Diwali.

Visits by PM encourage the jawnas and make them feel good. When their family is not with them, it boosts their morale. The soldiers feel that there is someone who understands their feelings and spends time with them on Deepawali.