New Delhi's Jama Masjid has created a controversy by pasing a notice on its entry gates forbidding entry of unaccompanied women. 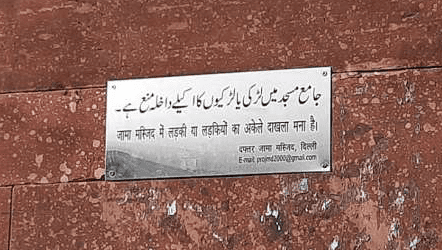 New Delhi: An intervention of the Indian government following a huge backlash from the civil society has forced Jama Masjid to withdraw a controversial order banning the entry of women in the mosque.

The withdrawal came after Delhi Lieutenant Governor VK Saxena stepped in to address the massive backlash from politicians and civil society.

The Delhi Commission for Women (DCW) took serious note of the matter and asked the mosque authorities whether they felt India was similar to Iran or other Islamic Republics, where women do not enjoy fundamental rights and liberties.

The Vishwa Hindu Parishad (VHP) also termed the notice anti-women and unconstitutional and asked the mosque to withdraw its decision.

The issue came to light due to presence of sign boards placed at the entry door of mosque. The message was: “Jama Masjid mein ladki ya ladkiyon ka akele dakhla mana hai”. It means that – authorities will permit entry of a girl or girls only if they are accompanied by male.

The notice clearly implied that the authorities will permit entry of girls only if accompanied by men. This is in accordance with Islamic worldview.

This created a furore forcing the Shahi Imam to step in. He defended the girls’ non-entry arguing that it was not applicable on those who visited the mosque for offering prayers.

Responding to the outrage, Jama Masjid Shahi Imam Syed Ahmed Bukhari said, “The LG spoke to me. We have removed the notice boards. But people visiting the mosque have to maintain its sanctity.”

The notice, which had no date, came up a few days ago. Mosque workers had pasted them at the three main entry gates, sources in the mosque administration said.