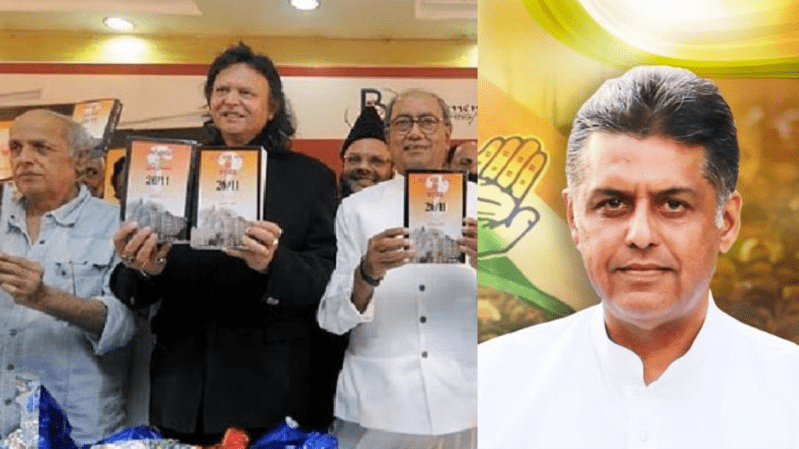 In his new book, Congress MP and former I&B Minister Manish Tewari has slammed the UPA government’s response after 26/11 Islamic terrorist attack.
In the 2008 Mumbai attack, ten armed Pakistani Mujahids killed over 160 innocent people. Moreover, they injured over 300 persons by shooting and bombing at different locations.
Days before the 13th anniversary of this gruesome attack, Tewari has released excerpts from his book- ’10 Flash Points; 20 Years  – National Security Situations that Impacted India’.”
The excerpts of his book released on Twitter state,

“For a state that has no compunctions in brutally slaughtering hundreds of innocent people, restraint is not a sign of strength; it is perceived as a symbol of weakness.”
“There comes a time when actions must speak louder than words. 26/11 was one such time when it just should have been done. It, therefore, is my considered opinion that India should have actioned a kinetic response in the days following India’s 9/11,” he added.

BJP has criticised Tewari about contents of his book. “After Salman Khurshid, another Congress leader throws UPA under the bus to sell his book. Manish Tewari in his new book slams the UPA for weakness in the name of restrain post 26/11. Air Chief Marshal Fali Major is already on record saying IAF was ready to strike but UPA froze,” tweeted Amit Malviya, BJP’s IT cell in-charge.

“Congress betrayed India by being mute spectators after the nation’s biggest national security compromise on 26/11. Not only did UPA govt look the other way while Indians were brutally butchered, they even blamed Hindus for the Pakistan sponsored terror attack!!,” added Priti Gandhi.
A twitter user commented, “Let me put it bluntly. Congress never retaliated post 26/11 because they never wanted to hurt minority sentiments in India. That’s the ugly reality.”
Well, it is the same congress that questions the current government and the millitary. They were seeking proofs of Balakot air strike and surgical strike following attack on India. But, Congress had miserably failed to take any concrete action when required. Congress remained passive when innocent Indians were killed. And, it knew that the well-planned attack originated from Pakistan.

In fact, Digvijay Singh, the political mentor of Rahul Gandhi went a step further. He fueled the conspiracy that it was RSS who had masterminded the attacks.