Liberal and Congress hypocrisy on self defence call by Sadhvi Pragya 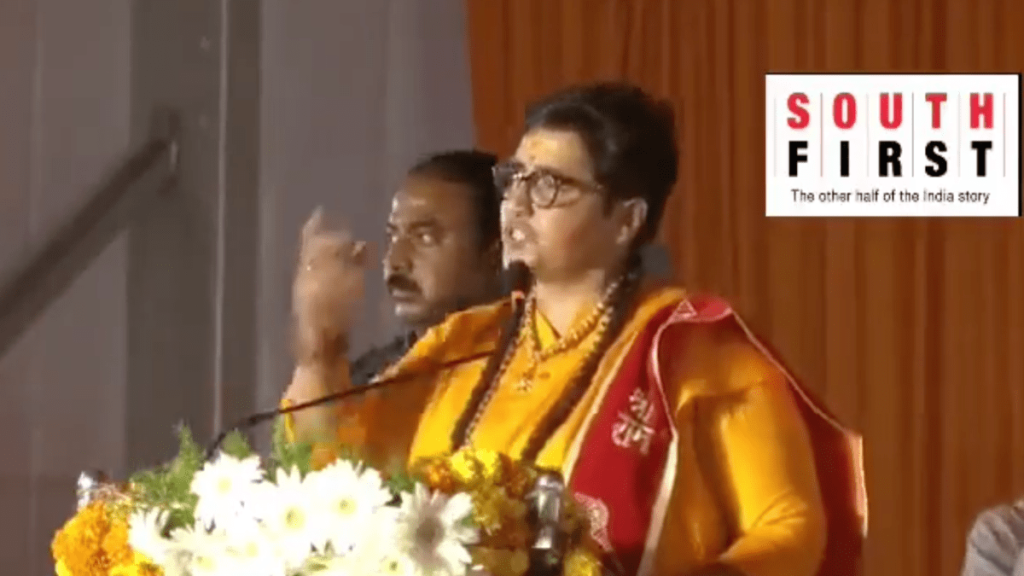 On Monday, the entire “liberal” eco system went berserk. They went after Sadhvi Pragya Singh Thakur. They took offence to a statement that the MP from Bhopal made during one of her speeches. She delivered this particular speech in Shivamogga, Karnataka.

An alleged journalist Anusha Ravi Sood uploaded a snippet of her speech. Her twitter bio proclaims that she works for a news portal called “South First”. She tweeted that Sadhvi Pragya had asked for “killing of Muslims”.

Before we come to this lie of the so called journalist, let us learn the tricks of propaganda from “liberals”. She used adjective “Terror case-accused” for an elected member of Parliament. That is how they malign or demonise their opponents.

Any self respecting or humane journalist would have had sympathy with Sadhvi Pragya Singh. Mumbai ATS arrested her illegally on trumped up and fabricated charges. The aim was to establish the bogey of “Saffron terror” or “Hindu terror”. She suffered unimaginable tortures at hands of corrupt cops. It was a travesty of justice. She suffered all these atrocities for nine long years.

It was the Congress nourished ecosystem and state apparatus that inflicted all this pain and trauma on one hapless lady. We, as a nation, the entire state apparatus, especially the media owe our apologies to Sadhvi Pragya. Instead, supari journalists are trying to still malign her by using propaganda techniques. That is what the adjective “terror case-accused” is doing here.

Something the non-left needs to learn is ruthlessness and the pack mentality of left. No sooner had she posted her tweet, all of them started amplifying the lie. Sahil Joshi, a Managing editor of Aajtak tweeted

The terror accused continues spreading terror …and nothing can happen.

The spokesperson of Congress

Tehseen Poonawala, the official spokesperson of Congress, uploaded the same clip. And used the very same trick of “terror accused” for Sadhvi Pragya.

Not to be left behind was the pet poodle of the eco system. Muhammad Zubair is a fact checker. The eco system has recommended a Nobel prize for Muhammad. It is a different matter that netizens have exposed his lies numerous times. One completion is available on opindia.

The “liberal” cartoonist Satish Acharya also chipped in to propagate the lie. He said that the speech of Sadhvi was “hate speech”.

The Islamist turns the story on its head

The MP from Bhagyanagar, Hyderabad, Azad-ud-deen Owaisi also chipped in. Hemant Karkare and Parambir were two senior cops who were responsible for torture of Sadhvi Pragya. And yet, Owaisi tried to show as if Karkare was an honest cop and Sadhvi a culprit.

The stooge for foreign forces

The above examples are illustrative. You can see the variety. Politicians, their stooges, cartoonists, fact checkers, supari journalists etc. Not citing more examples for the sake of brevity.

Call that Sadhvi Pragya never made

Reading their narrative, one would get an impression that Sadhvi Pragya has given an open call to kill Muslims or minorities. Let us just see what she actually said:

Give a Love-Jihad like reply to those indulging in Love Jihad. Keep your daughters safe. Give good education and sense to your daughters. Keep weapons in your houses. If can not keep anything else, just keep your kitchen knives sharp. I am saying it very clearly. We should have sharp knives in our houses to cut vegetables. They had stabbed our Harsha. They have stabbed our Hindu brothers, workers of BJP, Bajrang Dal and Yuva Vahini. Let us keep our kitchen knives sharp. We don’t know what kind of circumstances we might have to face. If we will have knives sharp enough to cut vegetables properly, only then will we be able to cut our enemies down.

There is no reference of killing Muslims. She is giving a clear cut call to Hindus that they should be prepared to defend themselves and their daughters. Now, that is a fundamental right for every individual.

There has been a spate of murders of Hindu girls. Especially at hands of their Muslim boyfriends, Husbands or live-in partners. The problem is not India specific. Such incidents of Muslim men with criminal mindset preying on non-Muslim women are taking place world wide.

Just like this incident, Le-Li intellectual gangs, trying to defend criminal intent of Muslim men. And, in most cases, try to blame the victims. This effort to demonise Sadhvi Pragya is the latest example. It is duty of every conscientious person to expose these double faced Left-Liberals of Le-Li gang.

Looking forward to the day they will start calling Rahul, Sonia, Priyanka and Robert as Corruption case-accused.