Islam safe under our rule: BJP leaders to Pasmanda Muslims

Deputy CM of UP, Brajesh Pathak addressed Pasmanda Muslims in Lucknow. The conference was organised by BJP Minority Morcha. 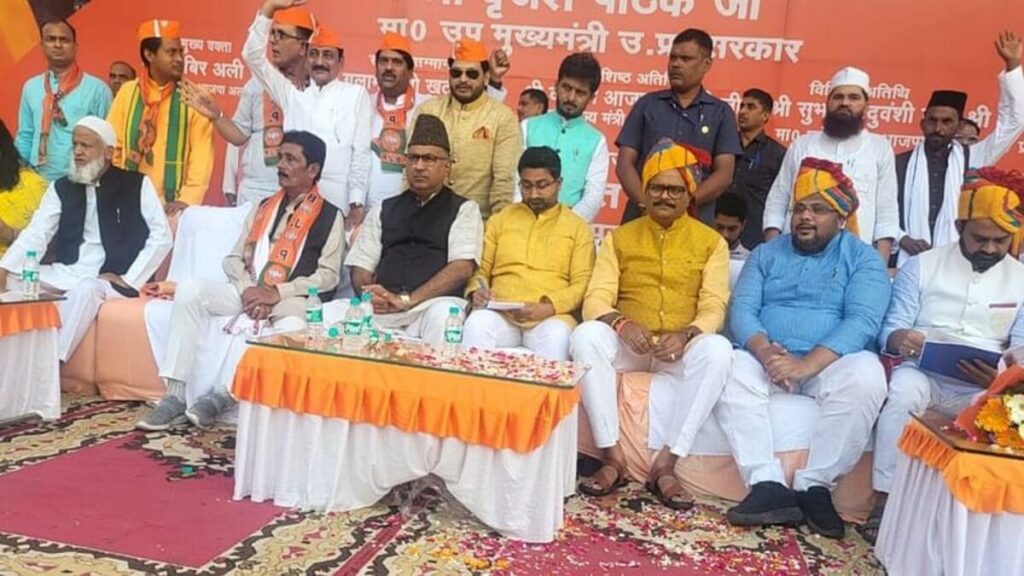 Ministers of UP government assured Muslims that Islam and Muslims are safe under BJP rule. Deputy Chief Minister Brajesh Pathak conveyed this message in a conference of Pasmanda Muslims. Minority wing of BJP had organised the conference on Sunday in Lucknow.

Pathak assured Pasmanda Muslims that BJP will not use Muslims as disposable assets. He said that other parties have used Muslims as tejpatta in Biryani. He was referring to culinary leaves used during preparation of a dish. These leaves are discarded after the dish is prepared.

Party functionaries honoured prominent Pasmanda Muslims during the conference. Dignitaries presented Saffron scarves and turbans to them amid chanting of slogans “Bharat Mata ki jai” and “Vande Matram”. It is worth mentioning that hardliner clerics and Islamists consider both these slogans “anti-Islamic”.

Parties have treated you like tejpatta since independence. Tejpatta is thrown out after cooking Biryani. Likewise, parties discarded you after taking your votes. You should have trust in Prime Minister Narendra Modi and strengthen his hands in 2024 Lok Sabha elections. Congress and Samajwadi party will make you fear the BJP. But, don’t believe them. Our party will never mislead you. Modi ji has worked to give rights to your community.

Sabir Ali, national secretary of BJP Minority Morcha also addressed the gathering. He said that PM Modi spent 12 minutes in the recent national executive meet of the party on the topic of Muslims. During the meet held at Hyderabad, Modi had highlighted that all other parties were ignoring issues of Pasmanda Muslims.

I can proudly say that the BJP believes in distribution, not division. It was for this very reason that the PM asked party workers to reach out the deprived and downtrodden. He talks about deprived sections from all communities and asks workers to uplift them. Only BJP can do such a work. It is our duty to move with a party that thinks of all sections of society. We should walk with people working for prosperity of every one, including Pasmandas. All other parties have always created a fear of BJP in the minds of Muslims. I will always be available to you.

Rajya Sabha MP from Jammu and Kashmir, Ghulam Ali Khatana was the main speaker at the conference. He praised PM Modi for abrogation of Article 370 in J and K. Khatana said the Nehru had inserted that section in the constitution to benefit few elite families of the state. It was Modi who ended this aberration. All other parties used Dalits and Muslims as vote banks. But, neither BJP, nor Modi have that mindset.