At a rally in Nasinu, Khaiyum called a candidate of rival FLP a 'Bhajaniya'. His Hinduphobic comment may damage his image during elections. 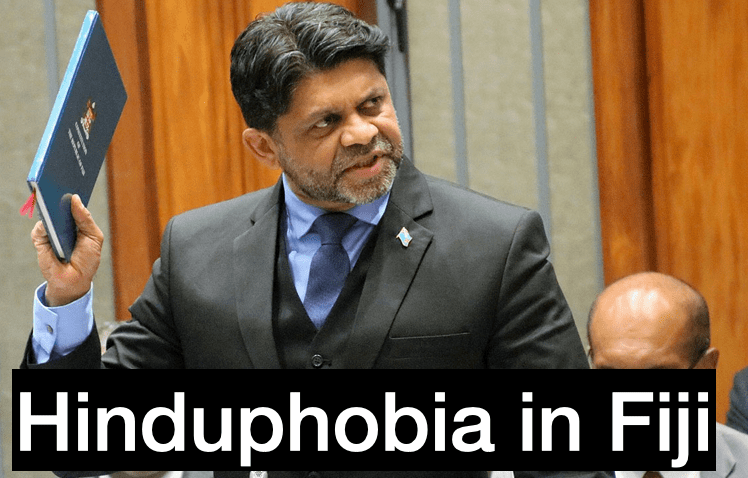 Suva: The tiny island country Fiji is the scene of latest incident of Hinduphobia. Fiji’s de-facto Fiji Prime Minister Aiyaz Sayed-Khaiyum has made extremely condescending and derogatory remarks against Hindu devotional singers. He has called them ‘Bhajaniyas’ and questioned their calibre to contest the Parliamentary election. He questioned whether the devotional singers would be able to speak in Parliament.

His outburst against these singers is an insult to the entire Hindu community. Hindu community has treated Khaiyum with extreme reverence until now. The Hinduphobic tone of his comments may dent his image. He is currently the Attorney General of Fiji.

Fiji Labour Party leader Mahendra Chaudhry said Khaiyum’s remarks last week were insulting and demeaning. Chaudhary said that Khaiyum has mocked a person who has a high standing in his community. The person whom he has called Bhajaniya is a very learned man.

“He has university education specializing in English language and literature as well as Hindi language and culture. Also he is a business and sales executive. He is deeply involved in religious and cultural activities,” he told The Fiji Times. “We must commend this young man for his strong religious background. And for spending his leisure time engaging in cultural activities. He is a grassroots candidate” added Chaudhry.

Indo-Fijians, the descendants of Indian indentured workers brought to Fiji by the British as labourers, are the second-largest ethnic group in Fiji behind the Indigenous Taukei people. Khaiyum’s comments indicate latent Hinduphobia.

However, Khaiyum should first look at his and his party candidates’ calibre before calling out devotional singers as Bhajaniyas. According to a News website, Khaiyum is accused of being the perpetrator of two bombings that took place in October 1987 in the capital Suva.

The first complainant in this case is Veronica Malani, daughter of the then-education minister Ratu Filimone Ralogaivau. She alleged that she saw Khaiyum throw a homemade bomb into the driveway of their family home 33 years ago, when she was 14 years old. In a statement given to police in July this year, Malani said she and her mother were both injured in the blast.

Khaiyum has also been accused of another bombing the day before — at a bus stop near a departmental store in central Suva — which again targeted Malani’s mother, injuring her and one bystander. Malani’s brother, Benedito Ralogaivau, who is now a police officer in Australia, also told police back in July that he watched this incident unfold as a child.

The incidents came in the aftermath of Fiji’s 1987 military coup, which saw Major General Sitiveni Rabuka take control of the government, a move he declared was aimed at stopping the Indo-Fijian community from taking political control of the country.

Khaiyum’s party candidates also have links to terrorism and stealing. Their candidate Zarina Begum Reece is accused of stealing from an NGO. Mohammed Zuhayr Khan, Faiyaz Koya and Mohammed Rafiq, are also allegedly involved in the 1987 bomb attack.