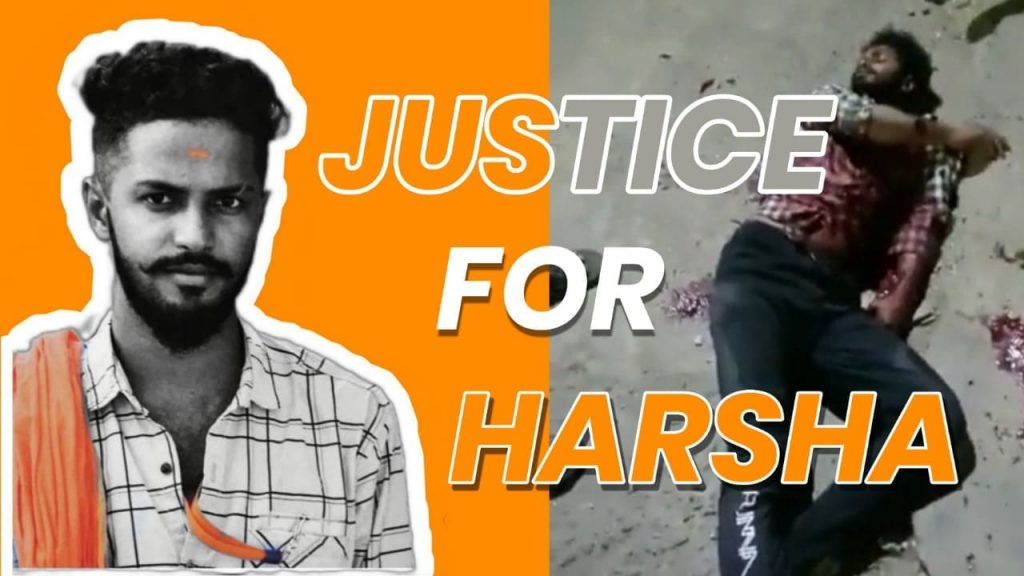 Apparently, the ongoing hijab controversy has claimed its first victim. A group of local Muslims brutally murdered Harsha, a 26-year-old, Hindu activist. The gruesome crime took place on Sunday (February 20) at about 9 PM.

Harsha was demanding uniformity in dress code for students, irrespective of religion. As per reports, police have arrested Islamists Kasif, Syed Nadeem and 4 others for the gruesome murder. The incident took place in Karnataka’s Shivamogga region near Kamath Petrol Pump. Murderers stabbed him repeatedly before fleeing in a car.

A profusely bleeding Harsha was taken to the Mc Gann district hospital, where he succumbed to his injuries. He was a tailor by occupation and belonged to Seegehatti in the Shivamogaa district. Harsha had been a member of the Hindu organisation, Bajrang Dal. He wore saffron shawl as a mark of protest against Islamist girls wearing Hijab in school. Hindus are demanding uniformity in the dress code of schools and colleges.

Earlier, Araga Jnanendra, the Karnataka Home Minister, had stated that the Police have detained three suspects and at least five people are involved in the murder.

As per reports, unidentified Muslim perpetrators pelted stones at the cremation procession of Harsha. The stone pelters have injured a cop, a photojournalist, and two other people, including a woman.

News9 reporter Priyanka Rudrappa uploaded images of the attack on social media. The footage shows members of the procession fleeing for shelter as miscreants are throwing stones at the congregation.

The police informed that the miscreants have damaged 20 vehicles and set several others to fire. The police force brought the situation under control, and the procession could resume normally. Hundreds of people gathered to accompany the 26-year-old youth’s remains to his residence following a postmortem.

Karnataka BJP minister for Panchayat Raj and Rural Development KS Eshwarappa said, “I am deeply disturbed by the murder of a Bajrang Dal activist,”. He was responding to the incident on Monday. He further added, ‘Musalmaan goondas’ (Muslim goons) killed him and We will not allow ‘goondaism’.

Dr Pradip Verma, State General Secretary of the BJP in Jharkhand has expressed anger at the incident. He said, “Harsha, a Bajrang Dal activist, was brutally murdered in Karnataka as part of a well-planned series of Hindus being murdered; such murders are driven by the Jihadist mindset.”

Further, Verma alleged that Rupesh Kumar was assassinated in Jharkhand due to this mindset.  by persons with the same jihadi mindset, and demanded that the perpetrators undergo severe punishment.

Vinod Bansal, the VHP’s national spokesperson, stated “The Bajrang Dal youth Harsha (26) killed yesternight in #Shivamogga of Karnataka was attacked by Jihadists earlier too. The culprits must be hanged soon. Bajrang Dal to have statewide protest this Wednesday.”

BJP leader Kapil Mishra said, “Every day they are killing Kishan, Rupesh, Hira Gujrati, Harsha somewhere. On the other hand, they are spreading rumours of Muslims being attacked in India. This is the new form of Jihad, media and political leaders are involved in it.”

Kangana Ranaut criticised Mahua Moitra for her anti-Hindu post on twitter. Moitra had posted a tweet depicting the revered Hindu Swastika stabbed with a knife with the caption “Liberal creates intellectual cover”. It further read, “The only good fascist is a dead one.” She posted image of the dead body of Harsha with caption “Street action team executes.”

Kangana posted, “This is wrong, for social media posts to simply voice their opinions people are being killed on the streets.”

She posted a screenshot of TMC leader Mahua Moitra’s tweet.