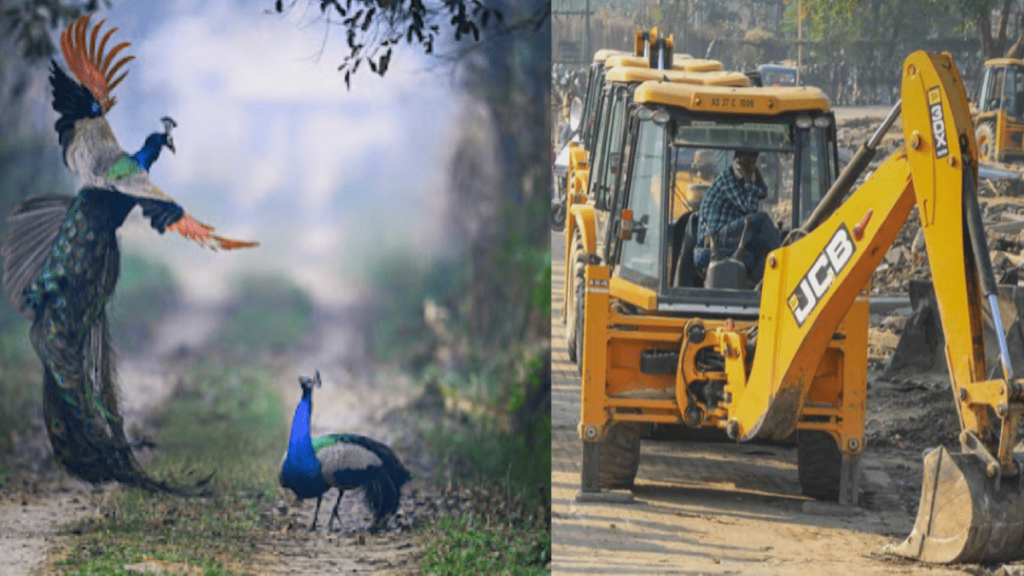 Lakhimpur (Assam): 700 families, mostly Muslims, had encroached as much as 450 hectares of forest land. They did it gradually, over the last three decades, in the Pavo reserved forest land. This happened under the patronage of successive Congress government which gave them land ownership documents through their touts.

After Himanta Biswa Sarma assumed charge as Assam chief minister, govt initiated scrutiny of documents. The authorities found that the documents in possession of the encroachers were fake. As a result, the land and revenue department rejected their ownership .

Thereupon, the circle officer of Nowboicha, started proceedings on September 7 last year. He personally approached the encroachers and asked them to leave voluntarily. The department had to start the eviction drive in September itself. But, they had to defer it due to floods.

The Himanta Biswa Sarma initiated eviction proceedings after the Guwahati High Court ordered the Assam government to clear all the forest land in the state from encroachment.

Last year the government had conducted an eviction drive in the Lumding reserve forest. Then, it had evicted almost 1000 Muslim encroacher families.

The latest action of clearing 450 hectares of forest land from illegal settlers underway in Assam’s Pavo reserve forest area is the continuation of the eviction drive. Among the encroachers are people from Assam and Bengali-speaking Muslims from the Nowboicha constituency.

The encroachment is so rampant that out of 2,560.25 hectares of the Pavo reserved forest, only a few hundred hectares are currently free of any encroachment, forest officials in Lakhimpur said.

On January 10, the administration evicted more than 600 illegal encroaching families, almost all of them are Muslims, from the reserve forest area.

Encroachers had occupied as much as 450 hectares of land under the Pavo reserved forest. The current eviction drive aims to free 200 hectares in the first phase on January 10. But the administration achieved more than the target on the first day of eviction.

Lakhimpur administration said that it has pressed into action, over 60 excavators and tractors and 600 security personnel since morning.

Interestingly, most of the encroacher families have left the area after the heavy deployment of security forces by the Lakhimpur administration. Due to this, the second day of the eviction drive is expected to be much easier. Moreover, the drive so far has been peaceful and not faced any resistance.

CM Himanta said that the master seeds cultivation in the area is also cleared by the administration. “The place was once a home for Asiatic water buffalo, elephants, leopards and lots of birds. The encroachers made it farmland which is unacceptable. It will be developed as a part of the Pavo forest area after the eviction,” he said.

Assam police has detained suspended Congress MLA Sherman Ali who had staged a protest against the eviction. Sherman had made provocative statements, arousing Muslims, during last eviction drive.