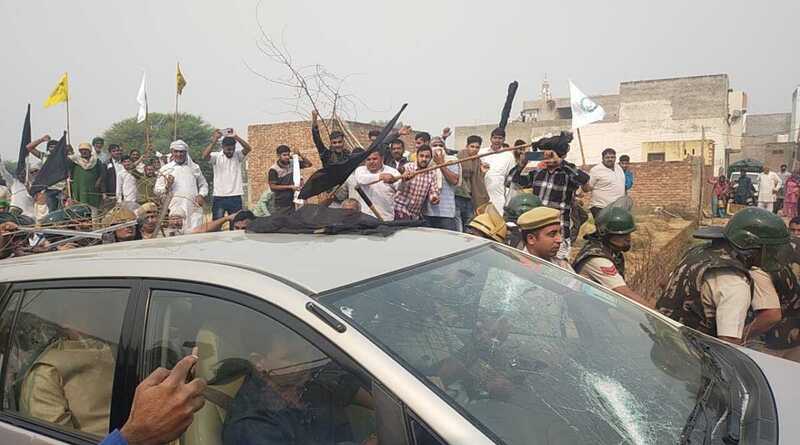 Violence and lawlessness by the “so-called” farmer protesters against farm laws continues unabated. The latest examples are from Rohtak and Hisar in Haryana.

In Rohtak, Bharatiya Janata Party (BJP) leaders were held hostage for about seven hours in a temple by “farmers”. And the windshield of the vehicle of Rajya Sabha MP Ram Chander Jangra was smashed in Hisar district on Friday.

The unruly incident occurred at about 12 noon when the party leaders had gone to the complex to watch live telecast of Prime Minister Narendra Modi’s speech at Kedarnath temple. This agitated the protesting farmers. They started demanding an apology from the leaders for “using a temple for political gains.”

The “farm protesters” came in tractors and gathered outside the temple. Soon they outnumbered the BJP leaders and cops at the site. The protesters then locked the door of the temple.

Fearing a law and order problem, additional police force was immediately called. Seeing the large number of protesters gathering around the temple, police force was kept on its toes by the “farmers’.

The tense situation could only be calmed after hours of ruckus. The BJP leaders reportedly apologised to the “farmers’ for using a temple for a political event. But, BJP vice-president Grover claimed no apology was offered, added the reports.

BJP Rajya Sabha MP Ram Chander Jangra also had to face a wrath of the agitators in another incident.He was greeted with black flags and slogans. Incident took place at Narnaund in Hisar where he reached to inaugrate a community centre.
The windshield of his vehicle was also broken in a scuffle between farmers and police.
Few policemen were also injured in the incident.
As per the MP,  he was on his way to a public event when some farmers threw lathis (sticks) on his vehicle, damaging the vehicle’s windshield.

But, they play victim card

Instead of feeling guilty for such unruly incidents, “BJPAttackedFarmersAgain” was trended on the Twitter by their supporters.

Now the pattern is becoming too obvious. After indulging in violence and lawlessness, the protesters start playing victim. Be it the attack on Red Fort, brutal killing of a dalit or beating innocent street vendors.

Protesting peacefully is a fundamental right. In fact, it can be a tool to strengthen democracy. But somewhere a line has to be drawn.

The patience of common citizens is being tested on daily basis. Is it a failure of law enforcement agencies? Or they have been stifled by their political masters? Let us hope that the growing lawlessness will be put to an end by the authorities concerned.