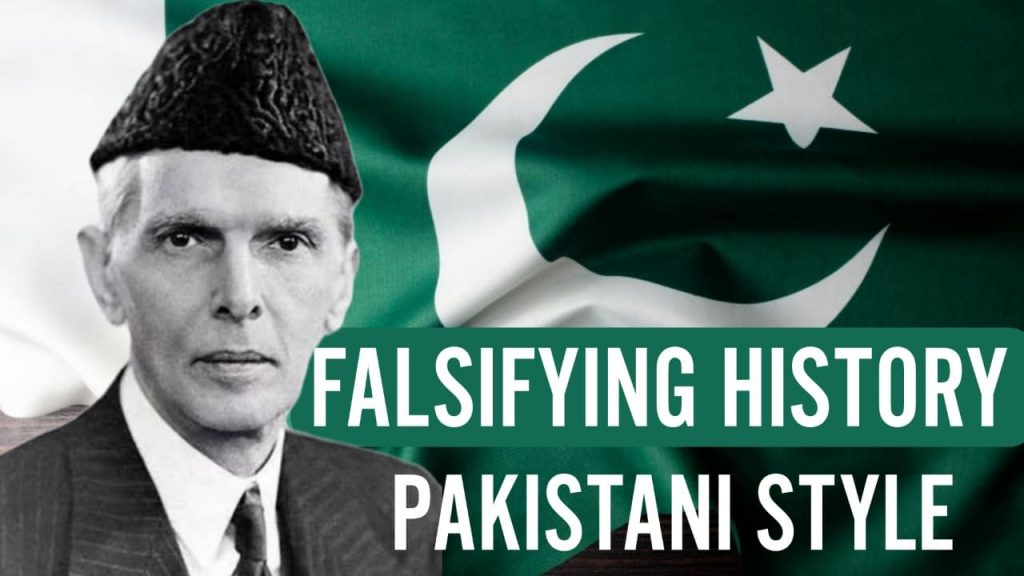 Yvette Claire Rosser is an US scholar working for a long time on the text-books in the Indian sub-continent. Recently she has written a small book entitled Islamisation of the Pakistani Social Studies Textbooks (Delhi: Rupa, 2003). It contains, inter alia, very interesting details of contradictions between the Pakistani nationalism and its Islamic faith.

For instance, on the one hand Pakistani historians use all means to justify creating of a Pakistani nation. Entire histories of Sindhis, Balouchis are denied to serve the purpose, so that they all must feel themselves as Paksitanis, nothing else. On the other, for the purity of Islam, they frequently reject the very concept of nationalism. They resort to this jugglery in order to show Pakistan as a leading member of the pan-Islamic ummah.

The history of Pakistan, according to its text-books, is not from 1947 but traced ‘from the life of Prophet Mohammed’. In between, they elide and evade many centuries of history. They take into account only those events that show the development of the idea of Pakistan.

Hence the narrative begins with the conquest of Sindh in 712 by an Arab Muhammad-bin-Qasim (no mention of Mohen-jo-daro, Harappa etc., all non-significant, jahiliya entities doomed for destruction). They narrate the story of the Arab’s march up to the river Indus with a flourish as the first moment of Pakistan.

After this incident, they conveniently ignore the next three centuries. The next ‘Islamic hero’ is Mahmud Ghaznavi the other great-grandfather of the Pakistan movement. Then there is a gap of about 170 years. Next episode is Muhammad Ghori’s deafeat of Prithviraj Chauhan in 1192. After this they pick up the tale when Babar wins the battle of Panipat in 1526. Then Aurangjeb, Tipu Sultan, 1857, Aligarh Muslim University, Syed Ahmed Khan, Shah Waliullah, 1939 and the rest.

These authors have used social studies textbooks to articulate hatred towards their Hindu neighbours, Rosser says. Curriculum changes got institutionalized during Zia’s Islamisation campaign. Students study a course titled “Islamiyat”, a direct result of this campaign.

According to the UGC (of Pakistan) directive in 1983 the textbooks are “To guide students towards the ultimate goal of Pakistan – the creation of a completely Islamised State.”
As per this directive, they have four themes to establish in the pupils’ mind: the Ideology of Pakistan, depiction of Jinnah as an orthodox Islamic figure, ulema as heroes of Pakistan movement and emphasis on ritualistic Islam.

Dahir the Real Hero of Sindh

Such a task and eliding in textbooks has its own tragi-comic features. Textbooks say
Muhammad-bin-Qasim was great and welcomed by the Sindhis suffering under the then Hindu Raja Dahir. But contemporary Sindhis are still aware that Dahir was a local ethnic hero among his subjects. Rosser was told by a Sindhi, “good Sindhis know the real history.
In several cities in ancient Sindh, Muhammad-bin-Qasim beheaded every male over the age of eighteen and sent tens of thousands of Sindhi women to the harems of the Abbassid Dynasty.”

A farmer in Larkana explained why Sindhis are tolerant. He said, “our names are Muslim but our chromosomes are Buddhist”. What a pity! The descendents of the
aggressed are compelled to take pride in celebrating the aggressor’s victory which killed and insulted their ancestors. Such is the demand of ideology, in this case the ideology of Islam.

A Balouchi historian Prof. Agha Mir Naseer Khan related stories of Balouchis’ conversion to Islam under duress. Earlier they were fire worshippers, Zoroastrian, and even up to the present day, when Balouchis take a vow, they swear their oaths on fire.

He claimed that Pathans and Afghans are more fundamentalists than the Balouchis because Pathans were converted to Islam numerous times. They were Buddhist for centuries. As successive waves of Islamic invaders moved across Central Asia, the Pathans and Afghans were their victims, time and again. “After each invader would pass through their territory, forcibly converting the inhabitants, the local residents would again revert to Buddhism.

Then the next invaders would come and convert them by the sword again and again.” This, Prof Khan explained, was why the Pathans and Afghans practiced such a conservative and rigid Islam. They felt they have to prove their Islam-ness to save their lives, so they became strictly orthodox and conservative. In time it became their character.

These aspects of the history of Pakistan have no place in its books. Nor, for that matter, in Indian books written by eminent Marxist historians. It is noteworthy that Pakistani textbooks emphasis everything which, here, our Marxist historians condemn as ‘Hindutva invention’. Romila Thapar denies Mahmud Ghaznavi’s religious motivations saying, “Mahmud had heard that there was much gold and jewelry kept in the big temples in India, so he destroyed the temples and took away the gold and jewelry.”

In contrast, Pakistan Studies textbook describes him as a religious warrior whose objective was to bring the ‘light of Islam’ to the idol-worshippers by waging a ‘holy jihad’. It was not greed, but religious fervour which nicknamed Ghaznavi ‘the idol-breaker’. Same contrast is observed in relating Aurangzeb, Akbar, Syed Ahmed Khan, Jinnah et al.

The depiction and arguments offered by our Marxist historians about them seem all invented ones. Pakistani text-books make it obvious to us.

Who is politicising History?

On facts of the medieval period the Pakistani textbooks there, and ‘communal’ (labeled by the Marxists) historians here, say the same things. Our Marxists, however, see no problem in this claiming that both are communalists and exaggerate certain events to suit their respective political purposes. But Yvette Rosser begs to differ. She found the facts, despite the interpretations, are indeed with the so-called communalists. It is the “eminent” historians like Thapar, who “falls in trap of presentism to analyse the past”. Thus the charge is reversed.

It is our Marxists carrying the political agenda to project secularism in medieval Islamic rulers where there was none. Pakistani textbooks do use selective passages from Indian Muslim scholars and chroniclers to support the eventual creation of an Islamic nation. Exactly the same passages our Marxist historians deliberately exclude in their narratives of the past.

Indian historians, from Sir Jadunath Sarkar to Sita Ram Goyal, dubbed as communalists, find this inappropriate. Not only because it encourages falsehood, leading to constant doctoring of history, but also as it causes confusion and resentment among Hindus. It is better to provide opportunities for the readers to understand the history as it was than to be lulled into false pride of superstitious iconoclasm or retrospective secularism.

Are protesting “farmers” transgressing the rights of others?

Hinduphobic ads on the rise; but the pushback has started