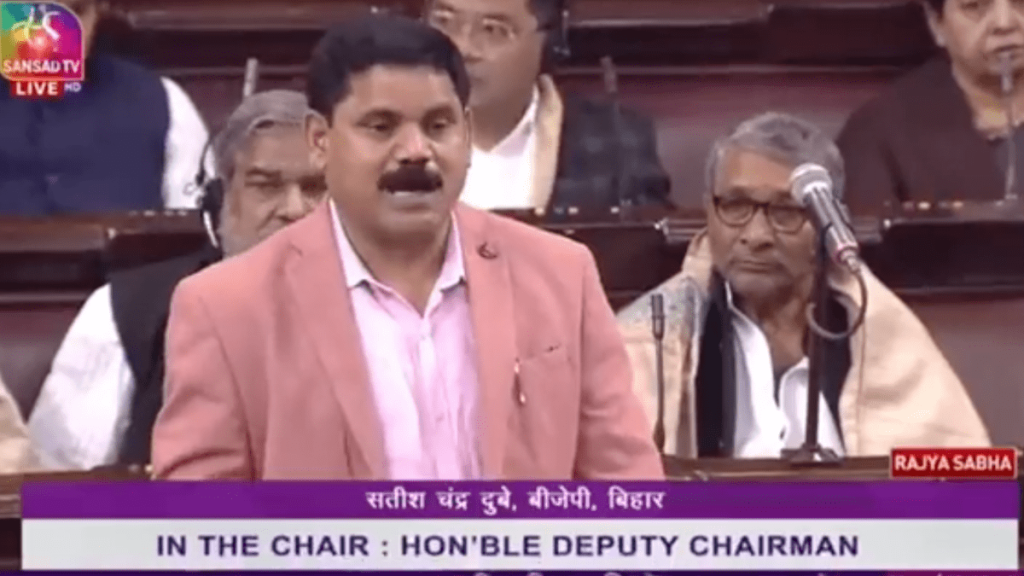 Satish Chandra Dubey is a Rajya Sabha MP from Bihar. He raised the voice for the most marginalised sections of the society. Dubey asked for raising the age limit for candidates belonging to economically weaker sections of ‘upper castes’.

During his speech in Rajya Sabha, Satish Chandra asked for provisions to relax the age limit for candidates appearing in various exams. At the same time, he also asked for relief in application fees for these exams.

Satish Chandra said that by providing these reliefs to the Economically Weaker Sections of the “upper caste” candidates, will be in line with the “Sab ka Saath, Sab ka Vikas” slogan of the government.

Dubey expressed his gratitude to Narendra Modi for providing reservations to the poor sections of so called upper castes. He said that the earlier governments could also have provided this relief. But, they did nothing for this marginalised population.

Previous governments could have provided the 10% reservation to poor upper castes. But they did not. From the floor of this house, I would like to thank Narendra Modi ji. He thought about the plight of these weak upper castes. Modi provided them an opportunity to live a normal life. I request the house to pay attention to this issue. The house should relax the age limit and application fees for candidates of the marginalised upper castes.

Punishing present for the past

The proposal by Satish Chandra is significant and daring at the same time. For last seven decades, politicians have created caste rifts for their myopic gains. Bashing of so called upper caste Hindus has been made fashionable. Anyone asking for a rational debate is labelled as Brahmanical or oppressor. In such a vitiated political environment, Dubey has shown courage to swim against the tides. Let us hope for a sane society and success to his effort.

British colonisers had created the caste fault-lines. Since 1947, politicians of different pursuasions have used and widened them for their short term political gains. Poverty does not discriminate between castes and creed. And yet, the political system has oppressed the so called upper castes. Caste politicians have justified this oppression by citing real and imaginary atrocities of the past.

In a way, Satish Chandra Dubey has taken a bold and humanitarian step.