Body of Afzal Khan was buried at the spot where Shivaji Maharaj had slain Afzal on November 10, 1659. The day is called 'Shiv Pratap din'. Islamist Fakeer's usurped the adjoining area and had built rooms and shrine on forest land. 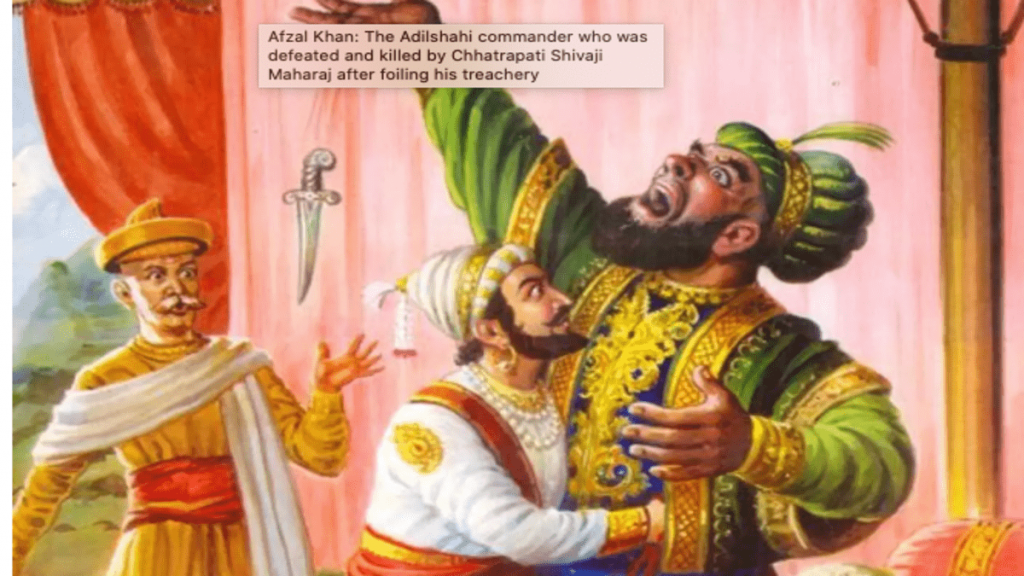 Hindus all over Maharashtra celebrate November 10 as ‘Shiv Pratap din’. They do so to celebrate the victory of Chhatrapati Shivaji over cruel Afzal Khan. Yesterday, on this auspicious day, Maharashtra government removed illegal encroachments that had come up around the grave of Afzal Khan.

The Satara district administration in Maharashtra started demolishing “unauthorised structures” around the tomb of Afzal Khan. The demolition drive is in compliance of orders of Bombay High Court.

It is interesting to note that the High Court had determined that the illegal structures were on forest land. Subsequently, the court order demolition of such structures but administration did not comply. Then the petitioners had to file a contempt of court petition for compliance. The action on ‘Shiv Pratap din’ was a result of this petition.

The Superintendent of Police of Satara, Sameer Shaikh said that state revenue and forest department had taken the action. The administration had deployed police to ensure proper law and order situation. The action is not connected to ‘Shiv Pratap Diwas’.

Ruchesh Jaivanshi, the collector of Satara had imposed section 144 in the area. He said, “We are demolishing only the unauthorised permanent structures built near the tomb. There are about 19 rooms and other illegal constructions on government land. The administration will demolish them, but, the grave will remain as it is. We are hopeful of completing the demolition work by Thursday night. In the last week, the state government advised us to take the action. After proper planning, we are acting as per the court order. ”

He further stated that ‘Shiv Pratap din’ and demolition drive are a coincidence. The required manpower was available on this day therefore we are carrying out the work on this day.

When news reports came about the demolition drive, an advocate, Nizam Pasha, approached Supreme Court to stop the drive. The Court has admitted the application and will hear it on Friday. Pasha has presented the petition before a three judge bench. The bench comprises Chief Justice D Y Chandrachud, Justice Hima Kohli and Justice J B Pardiwala. Pasha had asked for a Status Quo to which the bench agreed to hear the matter on Friday.

‘Shiv Pratap din’ dates back to November 10, 1659 when Shivaji killed Afzal Khan. Justice Pardiwala asked Pasha about the date on which the structure came into existence. When advocate Pasha replied that a trust raised the structure in 1959, Justice Pardiwala expressed his surprise. He asked,”How did the shrine of a person who died in 1600s came up in 1959″?

It is worth mentioning that a trust called ‘Hazrat Mohammed Afzal Khan Memorial Society’ has filed this application.

Whether it was a coincidence or the action was planned for ‘Shiv Pratap Diwas’? Whatever may be the truth, but, it seems like poetic justice. Bigots like Afzal Khan don’t deserve glorification in a civilised society. The demolition drive should be a lesson to those trying to resurrect such medieval monsters.