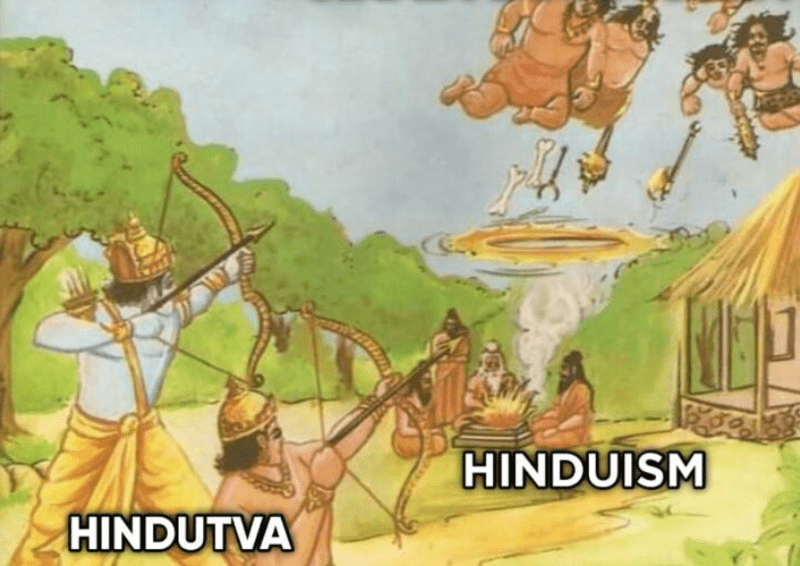 The “Hinduphobic” Congress Party has once again shown its hate towards Hindus.
Close on the heels of Congress senior leader Salman Khurshid comparing Hindutva with world’s dreaded International terrorist organisations like ISI and Boko Haram in his newly launched book, now it is Rahul Gandhi, who has angered several Hindus.

“What is the difference between Hinduism & Hindutva, can they be the same thing? If they’re the same thing, why don’t they have the same name? They’re obviously different things….Is Hinduism about beating a Sikh or a Muslim? Hindutva of course is,” he said addressing an online gathering.

He went on to say,”Is Hinduism about killing Akhlaq? In which book it is written? I have not seen it anywhere? Where is it written that you should kill an innocent man? I am unable to find this in Hindu, Islamic and Sikh scriptures. I can see it in Hindutva.”

Twitter handle of the National Indian Congress shared his video. The tweet was captioning “Hindutva and Hinduism are two different things”.

Although Rahul Gandhi did not issue any statement regarding Khurshid’s statement, but it seems by sharing this video after Khurshid’s remark, he is trying to justify his colleague’s utterance.

Khurshid’s book Sunrise over Ayodhya: Nationhood in Our Times was released this week. The book has generated a lot of controversy. Salman Khurshid writes that Sanatan Dharma and classical Hinduism known to sages and saints is “being pushed aside by robust version of Hindutva, by all standards a political version similar to the jihadist Islam of groups like ISIS and Boko Haram of recent years.”

Congress’s own leader and ally Shiv Sena slammed his statement. Senior cong leader Ghulam Nabi Azad, issued a statement saying, “We may not agree with Hindutva as a political ideology distinct from composite culture of Hinduism, but comparing Hindutva with ISIS and Jihadist Islam is factually wrong and an exaggeration.”

Shiv Sena spokesperson Manisha Kayande has said that no organisation espousing Hindutva was involved in terror activities. She was reacting to Salman Khurshid’s comments.

BJP’s IT cell head, Tweeted, “As if equating Hindutva to the jihadist Islamist groups like ISIS and Boko Haram wasn’t enough Salman Khursheed persists with Sonia Gandhi wept copious tears when she was shown pictures of terrorists killed in Batla House but showed no compassion for decorated Mohan Chand Sharma.”

Netizens hit back at support system of Congress

Arfa Khanum Sherwani, a writer for left leaning propaganda site ‘The Wire’ apparently tried to support the bogey of Hindutva vs Hinduism. Rashmi Samant Tweeted, “Hindutva is the act of Hindus trying to save themselves from forceful conversions (i.e predatory proselytization) and jihad, whilst Political Islam or Islamism is the very forceful conversion (i.e predatory proselytization) and j!had that Hindus are trying to save themselves from.”

“Supreme court says Hindutva is a way of life but Janeudhari @RahulGandhi wants to defend Salman Khurshid for votebank constraints. Even when he compared Hindutva to Boko Haram. Infact Rahul says Hindutva teaches you violence !! SHOCKING.”