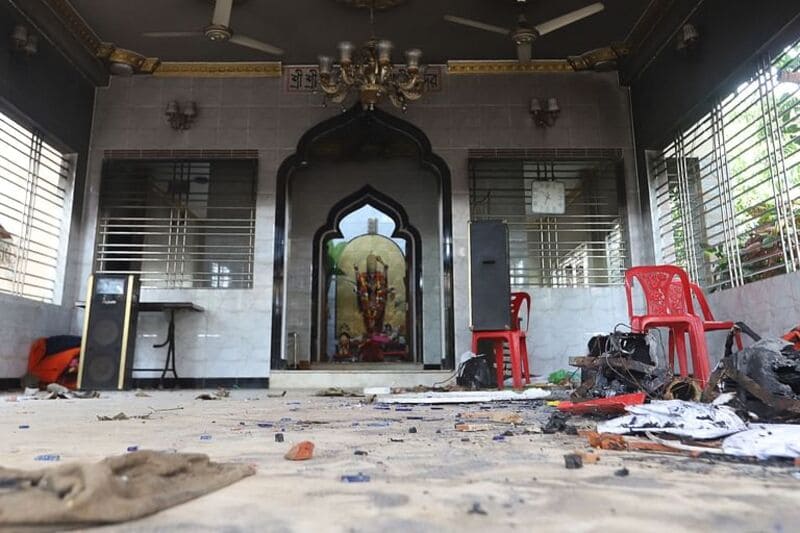 Hindu devotees, busy in celebrating Durga Puja were attacked by Muslim mobs in different parts of Bangladesh. As usual, the excuse for these dastardly acts were rumours that Quran, the religious book of Mohammedans was desecrated in one of the Durga pandals.

According to reports, Hindu temples have been vandalised in Chandpur’s Hajiganj, Chattogram’s Banshkhali and Cox’s Bazar’s Pekua. The sites of Durga Puja pandals was littered with broken Moortis of Hindu deities and blood of innocent Hindu devotees.

An attack was launched on Durga Puja venue at the Lakshmi Narayan Akhra temple in the district’s Hajiganj upazila on Wednesday evening. At least three persons have been reported dead, according to reports.

The rumour of desecration of Quran started from Comilla city and soon spread to different parts of Bangladesh, reported Dhaka Tribune. The frenzied Mohammedans clashed with the local adminstration and police when they tried to control the situation. When the situation went out of hand, the Rapid Action Battalion (RAB) and Border Guard Bangladesh (BAB) had to be called in to reign in the unruly mob.

First incident of attack on Hindu festival took place on Wednesday, when they were celebrating their annual Durga Puja. Since then, the Mohammedans went on such a rampage that the Border Guard Bangladesh (BGB) had to be deployed in 22 districts, including Comilla, Narsingdi, Munshiganj and Chittagong.

“41 persons have been arrested so far in different cases”, said Faruk Ahmed.

One person Muhammad Fayez-ud-din, has been detained by the Police for spreading rumours on social media that was responsible for initiating the murderous attacks on Hindus. It has been said that he is being questioned by the probe committee that will submit its report within three days.