JNUTF has condemned the Anti Brahmin hate graffiti painted on the rooms and walls of JNU by anti social elements. 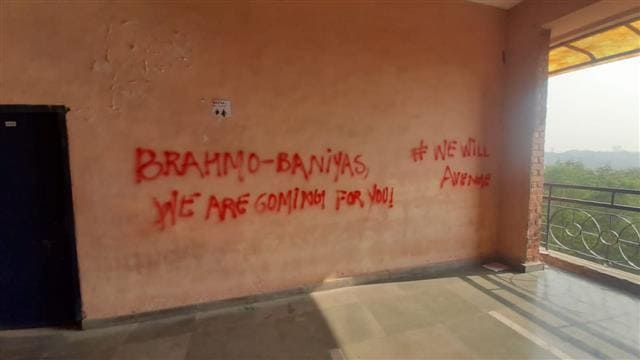 New Delhi: The Left-Liberal goons are at it once again. They are inciting caste divide. And adopting a tactic akin to a mindset infested with a totalitarian and absolutist belief system.

The Left elements have defaced several buildings on the Jawaharlal Nehru University (JNU) campus on Thursday with anti-Brahmin slogans. The JNU Teachers Forum claimed that hate mongers despicably vandalised the walls in the School of International Studies II building. The hateful slogans against Brahmin and Baniya communities indicate a perverted mindset.

Some of the slogans on the wall are “Brahmins Leave The Campus”, “There Will Be Blood”, “Brahmin Bharat Chhodo” and “Brahmino-Baniyas, we are coming for you! We will avenge.” RSS-affiliated Akhil Bharatiya Vidyarthi Parishad accused the left of vandalisation.

JNUTF has Condemned the Anti Brahmin graffiti. It said that this reveals a mindset that is infested with a totalitarian and absolutist belief system. Such behaviour is alien to Indian culture.

“We are well aware of the dangers of such a mindset. It works constantly to widen the faultlines for destabilising the society. The 20th Century European history is full of examples where the slogans of ‘go back’ and ‘leave’ lead to inhumanity and totalitarianism. We will not allow any such element to succeed in their sinister and divisive agenda,” JNUTF said.

It further stated that the defacement is nothing, but an ugly expression of invective directed at the political allegiance of the victimised teachers.

“This is, in essence, an attack on the political freedom of the fellow teachers who belong to marginalised groups and a cowardly attempt to coerce teachers to fall in line,” it said.

The academic work that includes teaching, learning and conducting rigorous research requires a conducive and enabling environment. The room of a faculty member is not merely a physical space, rather it is a sacred and intellectual space, where one devotes oneself to the pursuit of knowledge and provides intellectual guidance to the nation. But, alas, some menacing and depraved miscreants have routinely been defiling the campus space and besmirching the hard-eamed repute of the university.”

The JNUTF said that it believes this tactic is akin to subtle violence. Such tactics are used to intimidate, threaten, demoralise and degrade the academic space of the individual.

It also highlighted the incessant failure of the security system in campus that is increasingly deteriorating with every passing day.

“There is not even a single individual whose psyche is not gripped with the nagging fear emanating from the ineffective security apparatus in JNU. This is to put on record that we have raised the issue of security concerns on multiple occasions in a vociferous manner, but its words have been falling on deaf ears,” JNUTF lamented.

“We fail to understand the compulsion of the administration as to why it is not ridding itself from such a security system. This is a matter related to life, liberty, property and, above all, the dignity of the teaching fraternity,” it said.

The JNUTF demanded that the university should set up an independent inquiry committee. This committee should look into this incident and bring the miscreants to justice.

It also appealed to the administration to protect the dignity of teachers. JNUTF said the university should restructure the security architecture of the campus immediately.

“We demand that an impartial enquiry committee be constituted to look into the matter by the administration and restore the confidence of the fraternity by ensuring safety, security and social cohesion on campus. We appeal to the JNU community to be cognizant of such divisive forces working to disrupt the social harmony,” it appealed.

Meanwhile, Vice Chancellor Santishree D Pandit has asked the Dean of the School of International Studies and Grievances Committee to submit a report at the earliest.

Time has come for the central government to seriously think about this divisive mindset. Such hateful activities should not take place in the temple of learning.