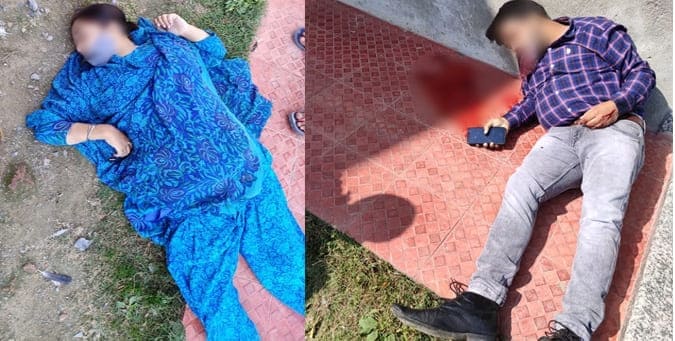 Two school teachers of Hindu traditions were killed by terrorists in the Eidgah area of Srinagar city on Thursday, according to the police.

According to the police officials the incident took place at about 11:15 am, when terrorists shot dead two school teachers at Sangam Eidgah in Srinagar district.”

The entire area has been cordoned off to nab the terrorists.

According to the reports, two or more armed terrorists barged into Principal Satinder Kaur’s office when she was having a meeting with 4-5 other teachers. They asked about the religion of those present in the office. The Principal herself being Sikh and another Hindu teacher Deepak were dragged out of the Government Boys Higher Secondary School building and then shot at point-blank range. The terrorists fled the scene after committing the dastardly crime.

They were rushed to the hospital where they succumbed to the injuries.

Journalist Aditya Raj Kaul while tweeting about the incident stating that the ghastly attack has been confirmed by the Inspector General of Kashmir.

It is pertinent to mention that just two days ago, on Tuesday, Islamic terrorists had killed two Hindus in Kashmir on Tuesday. One was 68 years old Makhan Lal Bindroo who had braved the Islamist bigotry and refused to leave Kashmir under duress by Islamic terrorists. His daughter’s video, in which she challenged the cowardly act of terrorists, has gone viral on social media. The second victim of such targeted killing of Hindus was Virender Paswan, a migrant from the Bhagalpur district of Bihar. Virender used to sell bhelpuri at the Hawal area of Srinagar.