26/11: the victims, the martyrs and the black sheep 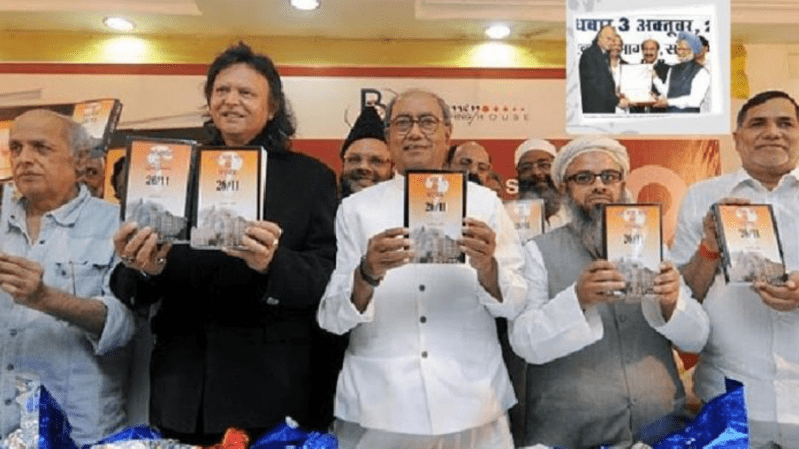 26/11 is not a date we should forget. On this day, our country was hit by one of the bloodiest Islamic terrorist attacks in recent history. It is a day to remember all the innocent victims and martyrs. But it is also a day to never forget the black ships among ourselves.

It is a day to refresh our memories regarding traitors also. Let us remind ourselves about those who tried to save Pakistan. And tried to portray it as a “Hindu terror” attack.

It is also an occasion to remember the journalist whose role has come under scanner. The journalists who, deliberately or accidentally, helped the terrorists by live streaming the actions of security establishment.

As the country pays homage to the those who lost lives 13 years ago, a video of senior Congress leader Digvijay Singh is going viral. In this video, he can be seen saying that there is no involvement of Pakistan in 26/11 Islamic terror attack.

This video was shot soon after Mumbai terror attacks. The occasion was the launch of a book titled – ’26/11, An RSS Conspiracy?’. It was written by a Pakistani called Aziz Burney. Digvijay Singh, the mentor of Rahul Gandhi, participated in the program. He can be heard saying, “…no where in this book you will see the involvement of Pakistani terrorists in the 26/11.”

This video, also shows film maker Mahesh Bhatt. He was also present during the launch of the book. He is saying, “When everywhere lies have spread, those speaking the truth are called karantikari”. Then Bhatt went on to say that Burney is a revolutionary.

Aziz Burney, the author of the controversial book is known for his anti-Hindu rants. Apparently, he had written the book to pin the blame on RSS. Although the attack was carried out by Pakistan-based Islamic terror group Lashkar-e-Taiba.

Shubhani Sharma, a journalist, tweeted, “Never Forget that both Congress (India’s leadership then) and Pakistan (the Terror sponsor) just happened to be on the same boat when it came to portraying 26/11 as a ‘Hindu Terror attack’.
Tukaram Omble (policeman) alone shattered all their plans.”

Shradhha, added, “Never forget the traitors within the country who blamed RSS for #MumbaiAttacks and promoted Pakistani propaganda of hindu terror.”

“26/11 terrorists had IDs with Hindu names. Ajmal Kasab was given the name ‘Sameer Chaudhury’ with red thread tied around his wrist. Plan would’ve succeeded had all terrorists been killed. If Kasab hadn’t been caught alive by Tukaram Omble, 26/11 would’ve been called Hindu Terror,” tweeted Anshul Saxena, a news junkie.

People are also remembering the the role jounrnalist Barkha Dutt “in endangering the lives of 100s of civilians during the 26/11 Mumbai terror attack.” People are sharing her reporting video of that day.

“….i managed to talk to some who are staying on the 19th floor…they have told me grenade explosion has taken place within the hotel in the last 15 mins…19th floor where my source is the floor where terrorists are active…,” she was speaking so in her reporting video.

She was also giving important information regarding deployment of security forces in the video. Footages of the crime scene were also being shown. These all gave terrorists an upper hand and lead as they were watching the TV inside the hotel.

Yashi recalled, “My sister was outside oberoi at this time and she told me how armed forces were constantly denying barkha dutt to not report the happenings as it is helping the terrorists inside, but woman didnt stop. enough reason to hate her.”

Naren Mukherjee, added, “#mumbaiterrorattack Barkha Dutt playing with the lives of 100s of civilians during the 26/11 Mumbai terror attack by disclosing their location in hotel. #NeverForgiveNeverForget.”

Over 160 people were killed and over 300 got injured in the attack. Senior cong leader Manish Tewari in his book has already slammed the then UPA govt for its response after the attack.